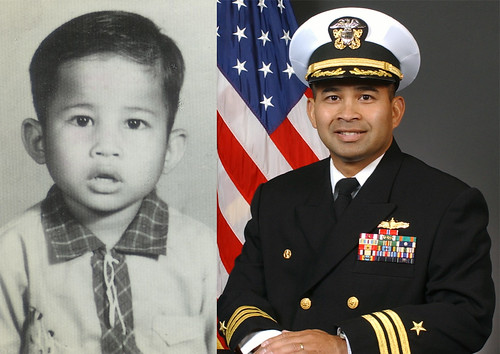 PACIFIC OCEAN (Nov. 16, 2010) - U.S. Navy Commander Michael Vannak Khem Misiewicz has visited dozens of ports over the course of his career, but none has ever evoked the emotions that will come when his ship USS Mustin visits Cambodia in December, marking the first time in 37 years that he has returned to the land of his birth.

As a young Cambodian boy born and living in the rice fields outside of the capital Phnom Penh in the late 1960’s / early 1970’s, Misiewicz – whose birth name was Vannak Khem -- wasn’t aware of the political tension building up around him. When his country plunged into turmoil, his family reluctantly gave him up for adoption to a young American woman who worked at the U.S. Embassy, allowing him to escape before the Khmer Rouge regime took over the country, eventually causing millions of deaths in what is known as the “Killing Fields.”

“I know it’s going to be very emotional,” said Misiewicz. “I was the lucky one in the family.”

Raised by his adoptive mother, Misiewicz enlisted in the Navy after graduating from high school in Lanark, Illinois. He was selected for the Navy’s Broadened Opportunity for Officer Selection and Training (BOOST) program, and attended the U.S. Naval Academy, where he received his commission in 1992. His service as a Navy Surface Warfare Officer ultimately brought him to command the guided missile destroyer USS Mustin, forward deployed to Yokosuka, Japan.

As commanding officer of the Arleigh Burke-class guided missile destroyer USS Mustin (DDG 89), Misiewicz and the more than 300 Sailors under his charge will conduct community service projects and interact with the Cambodian Navy. USS Mustin’s port call comes on the heels of U.S. Secretary of State Hillary Rodham Clinton’s visit earlier this month, and the first-ever Cooperation Afloat Readiness and Training (CARAT) exercise with Cambodia.

“It brings a lot of happiness to see my country – the United States – establishing a positive relationship with the country of my heritage,” Misiewicz said.

“America is truly the land of opportunity,” he said. “It’s the one country on earth where you start from the rice fields of a war-torn country and rise to command a U.S. Navy destroyer. It doesn’t get any better.”

For more than 16 years after moving to the U.S. in 1973, Misiewicz did not know what happened to his family in Cambodia.

“As a child I would cry almost every night, thinking about my family and what had happened to them,” Misiewicz said. “I had no idea at that point in my life whether they had survived the Killing Fields or not.”

“Quite honestly, it was less painful as I got older to not think about it,” he said.

While Misiewicz was pursuing his naval career, he did not know that his surviving Cambodian family had immigrated to the U.S. and was looking for him.

Sponsored by an American family and church, his surviving siblings and birth mother moved to Austin, Texas, in 1984. With the help of a college student, they started researching Misiewicz’s footsteps, and in 1989 they were reunited. But he also learned the devastating news that his father had been executed by the Khmer Rouge in 1977.

Misiewicz says the most emotional part of returning to Cambodia will be reuniting with his living blood relatives, especially an aunt who played a large part in his adoption and an uncle who hoped for a better life for Misiewicz. As a child, Misiewicz was very close to his aunt and often accompanied her at work as a maid for the American woman who later became his adoptive mother.

“My aunt got sick, so some arrangements were made between my adopted mom, my dad and my aunt to find a better life for one of us children, and my adopted mom found a liking toward me,” Misiewicz said.

While his aunt carried out her cleaning duties, Misiewicz’s future mother would let him watch movies and play games at her home. So in 1973, when she was scheduled to leave Phnom Penh, the only way she could bring the little boy she had grown fond of was to adopt him.

“I went [to the U.S] and I think the initial thought was for me to get a better education, live a better life and eventually return to Cambodia,” Misiewicz said.

Misiewicz was very young when he immigrated to the U.S. After arriving in Alexandria, Va., in April of 1973, his adoptive mother, Maryna Lee Misiewicz, who raised him as a single parent, enrolled him into the 1st grade the following fall. Misiewicz received extra English tutoring for the next three years and eventually continued his education in Lanark, Ill., which was his mother’s hometown.

“Lanark was and still is a population of 1,500 and I think I was the only non-Caucasian at my school,” Misiewicz said.

Nearly four decades later, Misiewicz believes the Navy has given him an incredible amount of opportunities that he would have never experienced had he remained in Cambodia. Although his ship’s upcoming visit has tremendous emotions attached for Misiewicz, he is also focused on his mission as Mustin’s commanding officer and hopes his background will help accomplish it successfully.

“I really feel privileged and blessed to be able to return with this crew to where I was born and to do so with the ability to promote American goodwill and share with Cambodians the success stories, not only mine, but a lot of success stories within our crew,” he said.

Misiewicz is not the only commanding officer of a forward deployed ship to visit his birth country in a U.S. Seventh Fleet ship. Korean-American Cmdr. Jeffrey Kim, USS John S. McCain’s (DDG 56) commanding officer took command of his ship in a ceremony held at Busan, Republic of Korea, in May, 2009. In November of 2009, Vietnamese-American Cmdr. H.B. Le, commanding officer of USS Lassen (DDG 82) made a port call to Da Nang, Vietnam, as the first Vietnamese-born American citizen to command a U.S. warship and visit the country. He escaped with his family from Vietnam near the end of the war in 1975.

Misiewicz says he is proud of his background and even more proud that the growth of diversity in the Navy has given him and others a chance to excel in life.

“When you think about all the things that could’ve gone wrong, I think I’m truly blessed to have so many opportunities and certainly the different miracles that have occurred just for me to reunite with my family.”