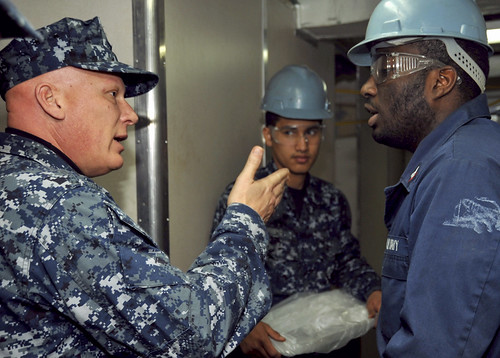 During Minyard's visit, he went on a tour of the ship where he talked to Sailors about various topics, and what they think can be improved upon and how they can be improved.

"The purpose of my entire visit to GW is to get a look at what and how the Sailors are doing," said Minyard. "I'm listening to their concerns, and getting a sense of what works and what doesn't."

"It's a great thing that he's talking with Sailors because he's asking questions to see our side and he's actually listening to what I have to say," said Aviation Boatswain's Mate (Equipment) 2nd Class Max Torres, a Sailor aboard George Washington. "This shows that he cares about the junior personnel all around the area of responsibility. He is genuinely interested in what our junior enlisted have to say, and the fact that he took the time to address our concerns truly speaks wonders about his leadership,"

Torres and other Sailors addressed several key issues with Minyard, including quality of life aboard the ship and the U.S. 7th Fleet's liberty policy.

"This visit has been very enlightening and I have gotten a lot of great feedback," said Minyard. "I appreciate honest feedback. I want the Sailors in this area of responsibility to know that the Navy leadership is taking their concerns seriously."