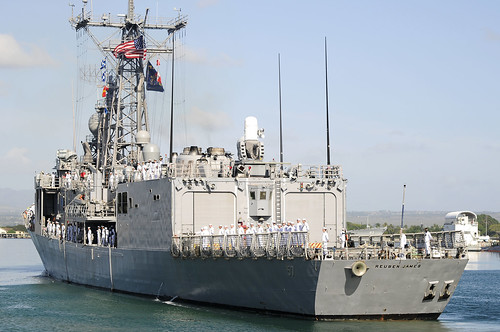 The patrol focused on detecting and reporting illegal, unregulated, unreported (IUU) fishing throughout the area, in both the EEZ’s of the island nations across the Pacific and on the high seas. Working with an embarked U.S. Coast Guard liaison during the patrol, Reuben James was able to coordinate the patrol with the U.S. Coast Guard District 14 headquarters based in Honolulu, Hawaii.

“This is the third patrol in just over a year Reuben James has participated in and the crew was very motivated and ready to thwart any IUU fishing,” said Seda. “This is a great example of two sea going services leveraging authorities and capabilities to expand our ability to conduct effective surveillance to protect the fishery resources.”

The effectiveness of the patrol was greatly increased through the use of the embarked helicopter detachment HSL 37 Easy Riders which consist of SH-60B helicopters, enabling the Reuben James to patrol a broader area than what would have otherwise been possible.