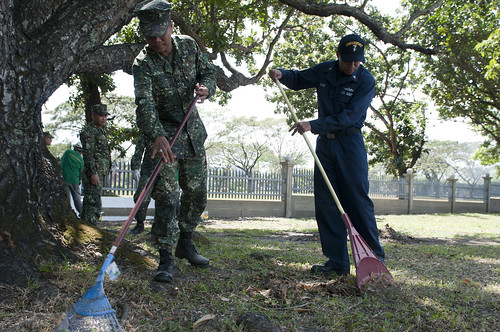 ANGELES CITY, Republic of the Philippines - Twenty-four Sailors from the U.S. 7th Fleet command ship USS Blue Ride (LCC 19) and 24 marines from the Philippine Marine Corps cleaned up a small cemetery, as part of a community service project on Feb. 14.

Blue Ridge’s and embarked 7th Fleet staff members of 5LSO, the E-5 Support Leadership Organization, said the group volunteered their time to show their respect to the men and women who wore the very same uniforms, they wear today.

“It always feels great to support others in need of help and give back to the community,” said Information Systems Technician 2nd Class (SW/AW) Calithea A. Sheppard, an embarked Sailor of U.S. 7th Fleet staff on board Blue Ridge.

“It was a great thing to do, and I learned a lot of history that I did not know about,” she added.

Clark Cemetery is home to the remains of 8,649 service members from all branches of the United States Armed Forces, as well as the Philippine Scouts, Philippine Constabulary and their dependents dating back to the 1900.

Larry Heilhecker, Clark Cemetery chairman for Veterans of Foreign Wars (VFW) of the United States of America Post 2485, said the Navy and local service members in the Philippine Armed Forces are big supporters of the cemetery, and their contributions are always greatly appreciated.

“It never gets old seeing the Navy here volunteering their time,” Heilhecker said. “We are glad to have you here anytime.”

The cemetery relies on donations to up keep and maintain the grounds. VFW receives no type of funding from the U.S. federal or Philippine government, and the U.S. Department of Veteran Affairs only provides American flags and engraved marble head stones, according to Heilhecker.

In November 1991, the U.S. Air Force departed the Philippines, turning over ownership of the grounds to the Philippine Air Force. Then two years later the Clark Development Corporation (CDC) agreed to take care of the cemetery.

However, VFW decided to take ownership of the cemetery in November 1994, because the CDC failed to keep the grounds to standards, dishonoring all veterans buried there, Heilhecker said.

“We rely on the help of volunteers from the Navy who come through out the year and the paid local Filipinos,” Heilhecker said.

Information Systems Technician 2nd Class (SW) Kevin M. Abney, assigned to Blue Ridge, said it was gratifying to work alongside the Philippine marines and to meet someone who reminded him a lot like himself.

“Like Me, he has a wife and daughter,” Abney said. “He joined the service because of how bad the economy got and wanted to make sure he could provide for us family.

“It’s not every day you meet someone from another country who is similar to you,” Abney added.

At the end of the day, the Navy once again nicely landscaped the cemetery alongside the Philippine marines in honor of those who fought before them, Heilhecker said.

“It is a great to see the Navy adopt us,” Heilhecker commented.