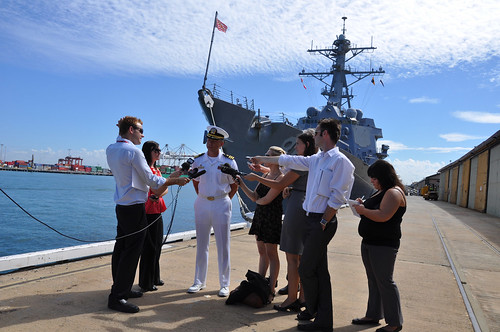 FREMANTLE, Australia - The guided-missile destroyer USS Shoup (DDG 86) sailed into Fremantle, Australia on Feb. 15 for a four-day port visit. This is first of three port calls Shoup will make in Australia.

Shoup’s visit to Australia comes on the helm of the 60th anniversary of the Anzus Treaty, a defense agreement signed in 1951 by Australia, New Zealand, and U.S.

The United States Consulate General, Aleisha Woodward, along with the local media greeted the Shoup upon its arrival and were given a tour of the ship’s spaces.

Shoup’s Executive Officer Cmdr. Matthew P. Roberts who was born in Sydney, Australia said the crew is looking forward to participating in community service projects with the local citizens of Fremantle.

“This port visit is a great opportunity to give to a community so hard hit but the recent bush fires,” said Cmdr. Roberts. “Personally, it’s a wonderful chance to return to the country of my birth and help families and new friends.”

Crew members will also attend and watch training sessions for the Fremantle Dockers and West Coast Eagles of the Australian Football League.

“The crew looks forward to the beautiful weather and exotic foods offered in the Navy’s most sought after liberty port,” said Lt. Elizabeth Erickson. “Australia truly is the U.S.’s closest partner in the Oceana region and we are excited to be spending our hard earned liberty in the company of so many friendly faces.”

Shoup is homeported in Everett, Wash., and is part of the USS Abraham Lincoln Carrier Strike Group. Shoup is currently in the 7th Fleet area of responsibility patrolling the Indian and Pacific Oceans.