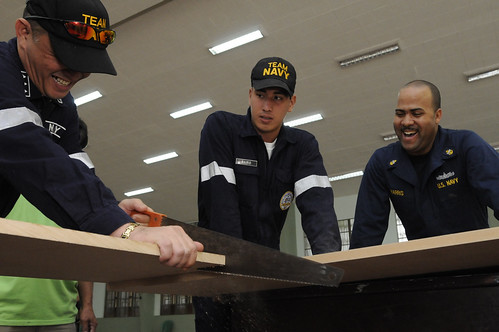 Sailors built 12 desks, six cribs and two full clothes dressers for residents of Hospicio de San Jose during the coordinated effort. Many Sailors expressed gratitude for being able to serve the community of Manila.

"I like helping people," said Ship's Serviceman 3rd Class Louis Gonzales. "You wouldn't believe how great it is to show up and see people from all over showing their appreciation that we are here."

Philippine navy seabees worked alongside the Blue Ridge Sailors to complete the construction project, lending expertise and tools to the effort.

"I feel very appreciative," said Philippine navy Chief Petty Officer Pablo Bauit. "The navy seabees are happy to be here. We would work until midnight if you asked. We are so happy to work with the U.S. Navy."

"It's good for residents to see people from the U.S. and Philippines helping them out," said Andrea Lindgren, a foreign service officer at the U.S. Embassy in Manila. "I spoke to a little girl who asked in Tagalog what we were doing, and I told her we were making a crib for her. If only everyone could see the smile on her little face."

Staff members assisted in the project, working side by side with the Sailors.

"I'm very happy. It's like the old times," said Sister Maria Socorro Evidente, a nun at the orphanage. "I have so many memories with U.S. Navy Sailors visiting and helping us here. We feel so happy to have such ties."

The Hospicio de San Jose is more than 200 years old and with more than 100 years of history with U.S. Navy volunteerism, with the earliest recorded volunteer event in 1910. The Hospicio is home to more than 400 orphans and dozens of elderly and mentally disabled persons.