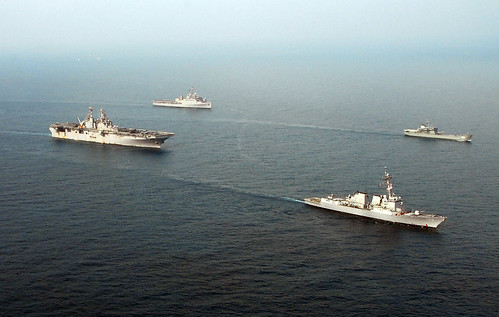 Throughout the exercise, militaries of the Kingdom of Thailand, Singapore, Japan, Indonesia, the Republic of Korea and Malaysia worked with more than 7,200 U.S. service members to demonstrate the ability to rapidly deploy a joint task force to conduct combined operations at sea and ashore.

“We were able to achieve all our goals of interoperability and training by working side by side with our Thai counterparts,” said Capt. Bradley Lee, commander, Amphibious Squadron 11 (PHIBRON 11). “We were additionally able to learn some lessons from our Thai counterparts and we greatly appreciate their hospitality to our Sailors and Marines.”

CG 11 was punctuated with multiple training evolutions, including a non-combatant evacuation operation (NEO) exercise, a visit, board, search and seizure (VBSS) exercise and a mock amphibious raid. The raid involved more than 11,000 personnel of various nations and utilized almost all of the ARG’s assets.

“The amphibious assault best exemplified the team work and bilateral training that we get from this exercise,” said Lee. “The coordination of air space and sea space furthered our understanding of each other's tactics and techniques, which will prove invaluable should we have to do any of the scenarios in a real environment.”

The exercise demonstrated the ARG’s ability to evacuate civilians during a time of crisis.

“The NEO exercise was an enormous undertaking, but it went very smoothly,” said 1st Lt. Patrick Grainey, 31st MEU NEO team leader. “We utilized helicopters and amphibious craft from various countries and hit our timelines right on the dot.”

“We conducted a fast, safe boarding and secured our target,” said Marine Capt. Tyson N. Schroeder, assault force commander. “A good VBSS team is an invaluable asset to have when conducting operations at sea. There are a lot of challenges to taking control of a steaming ship, but our team proved they have what it takes.”

The U.S. and the Kingdom of Thailand have been working together for 178 years. CG 11 was the latest in a continuing series of exercises designed to promote peace and security in the Western Pacific. This year’s exercise marked the 30th anniversary of the CG series.

Lee added, “I look forward to the next Cobra Gold and hope that we are able to build on the synergy that we achieved this year to create an environment even more integrated and efficient.”