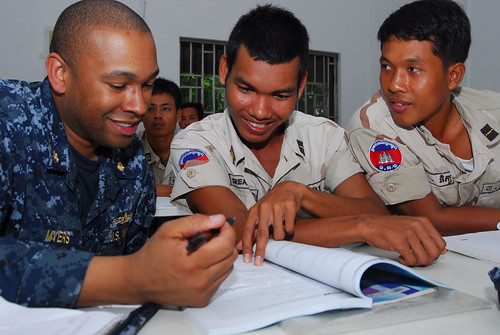 The purpose of the English exchange was to help members of the Royal Cambodian Armed Forces (RCAF) communicate in English with their American and English-speaking counterparts.

“Our Sailors learn English two-hours-a-day for one year before they go on a ship,” said Ensign Mom Samoun, a Cambodian English instructor. “It’s important to know how to speak and write English for communication with another ship in the fleet.”

The Essex Sailors taught grammar and basic sentence composition. They also paired up for one-on-one training for annunciation practice and group role-playing scenarios. Each Essex Sailor read lines and asked questions pertaining to daily situations such as getting a flat tire or going to exercise.

“I felt a lot more helpful by coming and teaching them,” said Operations Specialist Seaman Monique Mottley. “I want to be an English teacher after the Navy, so I really enjoyed being a part of this English exchange.”

The exchange helped both forces come together to interact, learn about each other’s military and hone their English skills.

Cambodia Maritime Exercise 2011 is a theater security cooperation visit designed to enhance interoperability and improve capabilities of the U.S. Armed Forces and RCAF.

“The U. S. Navy is always honored to have the opportunity to visit the Kingdom of Cambodia,” said Capt. Bradley Lee, commander, Amphibious Squadron 11. “Exchanges such as this help to further strengthen the relationship between our Sailors and Marines and the people of Cambodia, who have been such gracious hosts.”

The English exchange was just one of a series of events in which U.S. Navy and Marine Corps personnel will participate designed to enhance interoperability between the two nations. During the exercise, U.S. Sailors will teach courses in military leadership and the 31st Marine Expeditionary Unit's medical staff will work with their Cambodian counterparts to provide primary care services, dental care and optometry care to Cambodians in the Kampong Som province.