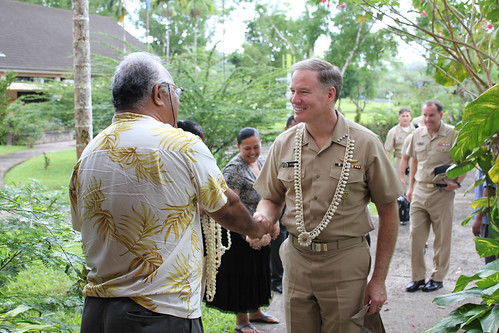 With headquarters at Pearl Harbor, Hawaii, PACFLT is the world's largest fleet command, encompassing 100 million square miles and consisting of approximately 180 ships, nearly 2,000 aircraft and 125,000 Sailors, Marines and Civilians. Admiral Walsh is the 32nd Navy officer to command PACFLT since its establishment in February 1941. During his meetings with government officials, Admiral Walsh highlighted the upcoming Pacific Partnership initiative, PACFLT’s humanitarian assistance mission that provides medical and civic assistance across the Pacific. Its flagship, the USS Cleveland, will visit five island nations this summer: Tonga, Vanuatu, Papua New Guinea, Timor-Leste, and the Federated States of Micronesia.

Upon his arrival to Pohnpei State, the Admiral and his delegation traveled to Palikir for a courtesy call on F.S.M. Department of Foreign Affairs Secretary Lorin Robert, members of the Executive Cabinet, and other senior government officials. Accompanying the PACFLT delegation were U.S. Ambassador to the F.S.M. Peter A. Prahar and Embassy representatives. Discussion during the courtesy call highlighted the strong U.S.-F.S.M. relationship, especially with regard to defense and security matters; the Center for Micronesia Empowerment’s efforts on Guam to train Micronesians in construction and other trade skills; and the need to capitalize on economic opportunities associated with the Guam military build-up. Secretary Robert thanked the U.S. Navy for its visit under Pacific Partnership 2008, and said the F.S.M. looks forward to the Pacific Partnership mission scheduled for this July. For his part, Admiral Walsh noted each bi-lateral interaction mentioned served as a “tangible representation of a promise and commitment” the U.S. has made to the FSM. Admiral Walsh also thanked Secretary Robert for the service of FSM citizens in the U.S. military.

The Admiral and his delegation then traveled to Kolonia, where they toured the newly-constructed Kolonia Elementary School. Completed last year, the Kolonia Elementary School was part of a three school, three million dollar Infrastructure Sector Grant under the Amended Compact. During their visit, Admiral Walsh and Ambassador encouraged students to study hard, highlighting that academic achievement increases the likelihood of future success.

school rehabilitation projects on Pohnpei and the outer islands, and expressed the hope that Pacific Partnership 11 engineering teams may provide some assistance with these infrastructure projects. The Governor also touched on state economic reform efforts and foreign investment. For her part, Director Keller highlighted her department’s efforts to provide community-level healthcare as preventative treatment to reduce hospital visits and costs. Director Keller expressed hope that the Pacific Partnership Subject Matter Expert Exchanges (SMEE) would help build enduring professional capacity in her staff. Director Keller then led the U.S. delegation on a tour of the hospital facility. Pacific Partnership 2011 will utilize the Pohnpei State Hospital for medical assistance (MEDCAP) and Subject Matter Expert Exchange (SMEE).