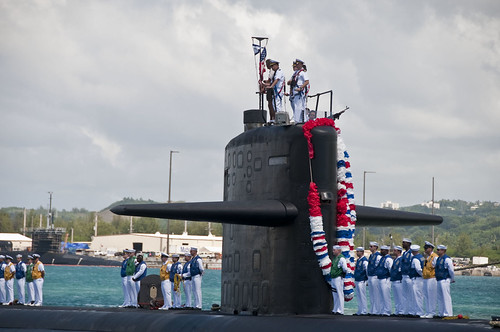 SANTA RITA, Guam (NNS) - USS Oklahoma City (SSN 723) arrived in Guam March 3, where it will be assigned to Commander, Submarine Squadron 15, as one of three forward deployed submarines.

During the arrival ceremony, Capt. John Russ, commodore of Submarine Squadron 15, emphasized the importance of submarines to be forward deployed to Guam.

Cmdr. Aaron Thieme, Oklahoma City commanding officer, thanked the squadron and U.S. Naval Base Guam for their support in ensuring a smooth transition. Thieme symbolically presented the submarine to the crowd and noted their arrival following an engineering overhaul, sea trials, certifications, and training.

"Today, I present to the commodore and the Guam community USS Oklahoma City, the newest addition to the proud Pacific submarine fleet," he said. "The crew has performed superbly throughout our deployment and I am proud of their accomplishments over the past several months as we've been looking forward to this long-awaited transition."

Chief Electronics Technician (SS) Brien Sadler was the first Sailor to disembark the boat and receive the traditional first kiss from his wife.

With a crew of approximately 130 personnel, Oklahoma City completed an engineered overhaul in November 2010 at Portsmouth Naval Shipyard. Oklahoma City is the second naval vessel to be named after Oklahoma State's capitol city. The boat was launched Nov. 2, 1985, and commissioned July 9, 1988.