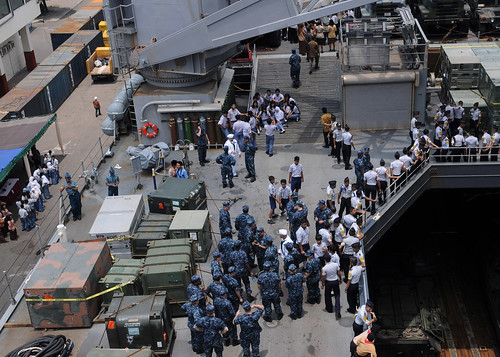 Upon the ship’s arrival, reporters from 20 national and local news networks waited on the pier to interview Germantown’s Commanding Officer Cmdr. Michael A. Crary.

“The purpose of our port visit is to represent an important opportunity to promote peace and stability in the Asia-Pacific region, demonstrate our commitment to regional partners and to foster our growing relationships with Indonesia,” said Crary to the media. “The U.S. and Indonesia are natural partners and friends and we look forward to continuing to strengthen the bonds and communication between our Navies and advancing our relationship.”

During the visit, the ship is will host tours and a reception for Indonesian military leaders, dignitaries and members of the local community. Sailors and Marines will also get the opportunity to bond with the Indonesian Navy during a planned sports day.

Service members will also participate in a community service project, where they will be able to join an outreach program with the local community.

“When we do a community service project, these are one of the few things as service members, we contribute to show the sense of voluntarism in America,” said Electronics Technician 1st Class Sean Donovan, assigned to the embarked Beach Master Unit 1. “It shows that we’re here to help and not just take things away from them.”

Surabaya is Indonesia’s second largest city and the capital of the province East Java. The city is known to Indonesians as the “city of heroes,” due to the historic war that took place in the city known as the ‘Battle of Surabaya,’ which became the turning point of Indonesia’s declaration of Independence from the Dutch empire in 1945.

Germantown is currently assigned to the forward-deployed Essex Amphibious Ready Group and is conducting an independent Western Pacific patrol of the U.S. 7th Fleet area of responsibility.