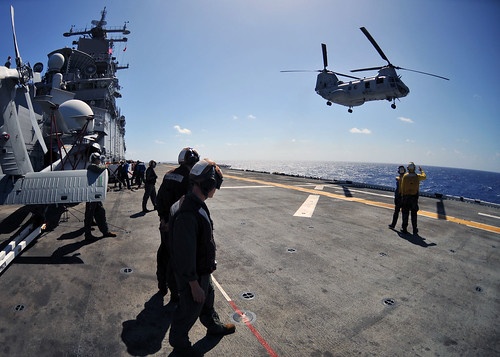 BOXARG arrived in 7th Fleet in support of the Navy’s maritime strategy, which includes maritime interdiction operations, counter piracy, humanitarian assistance, disaster relief and to promote peace and stability in the region.

“We are entering the Western Pacific area of operation on our transit west with all of our mission capabilities at the ready to support U.S. forces and our regional partners,” said Commander, Amphibious Squadron 1 Capt. J. Curtis Shaub. “Our Sailors and Marines continue to train during our passage through 7th Fleet, maintaining their already superb level of proficiency.”

“The world is seeing a high amount of unrest in multiple locations, and with the enduring sea-based assets of our Navy/Marine Team, deployable to over 80 percent of the earth, we can deliver a multitude of capabilities across the spectrum of kinetic and humanitarian mission sets,” said Shaub. “We also partner with nations, training and exercising, to lend additional stability and learn from our global friends, neighbors and allies,”.

The 7th Fleet area of responsibility includes more than 48 million square miles of the Pacific Ocean, running from the international date line to the eastern coast of Africa, and from the Antarctic to the Kuril Islands, Northeast of Japan. It contains more than half of the world’s population.

U.S. 7th Fleet units take part in as many as 100 bilateral and multilateral exercises each year. In addition to these exercises, ships deployed to the 7th Fleet conduct more than 250 port visits every year, as ambassadors of the United States of America.