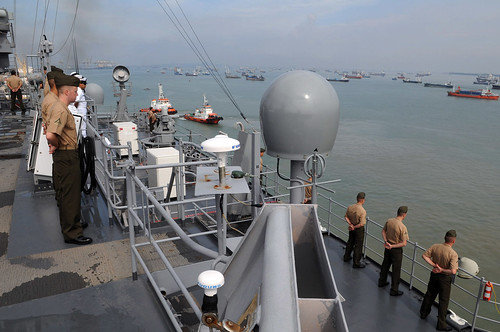 The U.S. servicemembers took advantage of the opportunity to bond and serve with the Surabaya’s citizen and host nations military through a sports day and community service projects organized and coordinated by the Navy and Marines of the Indonesian Armed Forces (TNI).

A group of 50 Sailors and Marines meet their host nation’s military counter-part, the Indonesian Navy and Marines at different locations inside the Komando Armada Ri Military Base, for goodwill games of volleyball, basketball and soccer.

“We are very happy to see the Americans,” said Lt. Josep Dani from the Indonesian Navy. “We waited, since we heard they are coming and we are very excited to play with them.”

The TNI team won soccer, one of the favorite sports in Indonesia, with the score of 4 and 2 for the U.S. team, after the game both of teams praised the outcome of the play disregarding who was the winner.

“We have a lot of fun and I think, we did really well for the first time playing together,” said Fire Controlman 2nd Class Greg Ball, “It is a friendly match and the Indonesians are really hospitable.”

The other activities of the day were two community service projects held at two locations attended by both Sailors and Marines. The first one, was at the Kadijah High School in Suribaya province and the second one was an English learning center at the Center for Civic Education (CCE) in Madura, island of East Java.

“I am proud and happy to see the U.S. Navy and Marines,” said Mustajab Bin Sumin, principal of the CCE, “they bring a lot of inspiration to our students who are eager to learn English by talking to them (Americans) personally.”

Both of the projects were designed to bring interaction and engagement though culture and language between the U.S. military and the students of both facilities.

“I love Children and I looked and treated these kids just as my own children,” said Sgt. Tara Hudson assigned from the 31st MEU. “They are natural and I was just being natural with them, they laugh, talk and do all these wonderful things kids does.”

Germantown is currently assigned to the forward deployed Essex Amphibious Group and is conducting an independent Western Pacific patrol of the U.S. 7th Fleet area of responsibility.