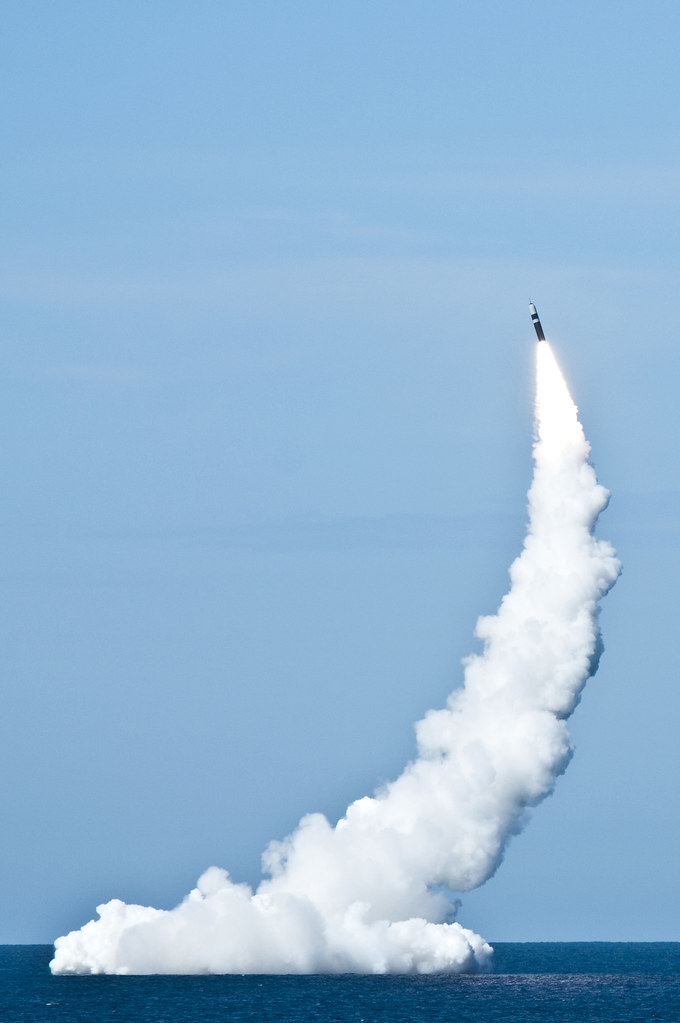 The missile, an unarmed Trident II D5, was launched as a single mission test and was the key element of the demonstration and shakedown operation (DASO) process certifying the readiness of an SSBN crew and the operational performance of the submarine's strategic weapons system prior to returning to operational availability.

More than 150 SSP employees and special guests were invited aboard the USNS Waters (T-AGS 45), a Military Sealift Command (MSC) vessel to witness the event and learn more about SSP and the DASO process.

"SSP teams with people from an array of commands and organizations throughout the months leading up to the DASO missile launch. The people representing Submarine Group 9, USS Nevada, Military Sealift Command and our contract partners who witnessed the launch from aboard Waters are a small fraction of those who work with Strategic Systems Programs to ensure we continue to successfully provide the nation's sea-based strategic deterrent," said Rear Adm. Terry Benedict, director, Strategic Systems Programs. Benedict was aboard Nevada observing the crew as they conducted the launch mission.

"This mission for MSC is just one in many that we do. We're proud to be a part of it," said John Thackrah, executive director of Military Sealift Command (MSC), who attended the launch.

Waters is an MSC vessel that provides support during the DASO launch as part of her mission. Instrumentation and personnel such as engineers and scientists are embarked aboard Waters to track the submarine and the missile throughout the launch process.

"It's quite an accomplishment, we're very proud of everybody that has pulled together for us today," said Rear Adm. Robert Hennegan, commander, Submarine Group (SUBGRU) 9. "Today was a terrific accomplishment for the USS Nevada, for Submarine Group 9, but more importantly for the entire SSP team and for all who are part of delivering the nation's deterrence posture. Everyone has done a terrific job and we're very proud of them."

Nevada crewmembers said they were also glad to see the successful launch occur after such an extensive maintenance period.

"It was the final event of a three and a half-year refueling overhaul," said Cmdr. Alan Schrader, commanding officer for Nevada's 'Blue Crew.' "To get to today, it means so much for me to see that missile go off in the air, and now we're ready to go and do our strategic mission."

Guests who watched the launch from aboard Waters said it was a once-in-a-lifetime experience.

"It was incredible," said Caitlin Hitt, co-president of the Naval Base Kitsap Officers Spouses Association. "Nothing that I ever expected, quite honestly I was shocked at how cool it was when it came out of the water."

Nevada was commissioned in 1986 as the eighth Ohio-class fleet ballistic missile submarine (SSBN). The Ohio-class design allows the submarines to operate for 15 or more years between major overhauls. Each SSBN has two crews, Blue and Gold, which alternate manning the submarines while on patrol to maximize strategic availability while reduces the number of submarines required to meet strategic defense requirements.