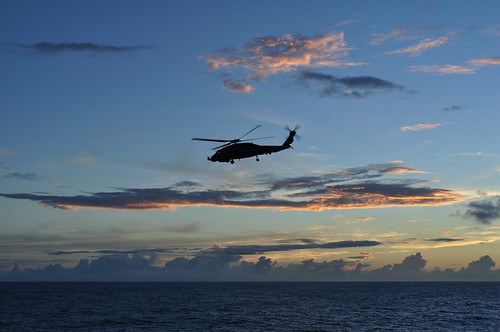 Preble, along with embarked U.S. Coast Guard District 14 liaison, focused on illegal, unregulated, unreported (IUU) fishing in the EEZ of the island nations and on the high seas.

Preble’s mission supported the United States’ long-standing partnership with the maritime nations of Micronesia, Oceania and the Marshall Islands as well as the USCG’s Oceania Maritime Security Initiative.

“It is crucial that we continue to not only exercise our interoperability with our sister sea service, the USCG, but enhance interoperability among allies and partners to build trust and increase multilateral effectiveness,” said Preble’s commanding officer, Cmdr. Joe Cahill.

With technological advances, fishing vessels have increased their capability and capacity to catch more fish than ever before. As a result, it is imperative that small island nations’ rights to their EEZ are preserved to prevent illegal fishing and exploitation of the ecosystems.

Cahill said the Preble along with the Coast Guard were instrumental in ensuring a forward presence.

“In the end, Preble and the USCG teamed up to strengthen our relationships with our South Pacific partners and allies,” Cahill said. “This operation showcases what we as a nation and team of nations can achieve if we work together. We are committed to this mission and look forward the next opportunity we have to operate in this area of the world.”

During the course of the operation, Preble encountered multiple vessels conducting fishing operations in EEZ. All the data was reported to USCG District 14 for evaluation and follow-on action.

“The partnership between the Navy and the Coast Guard is critical to our ability as a nation to execute mission tasking such as EEZ patrols,” Coast Guard Operations Specialist 1st Class Gary Smedley said. “Through our partnership, both sea-going services have a more significant impact on maritime security, partnerships with Pacific Island Nations and the protection of natural resources.”

A detachment from the Battle Cats of Light Helicopter Anti-Submarine Squadron (HSL) 43 embarked on board Preble, played a key role in conducting routine aerial patrols with their SH-60B Sea Hawk helicopter. The aircraft enabled the surveillance team the abilities to search multiple areas of interest during the transit.

“A ship with an embarked helicopter squadron has a unique capability to reach further over the horizon,” Air Detachment Officer in Charge Lt. Cmdr. Robert Radak said. “By conducting daily sorties, we significantly expanded our surveillance and data collection range. My team is proud to support Preble and the USCG in this significant patrol.”

EEZ patrols are part of an ongoing partnership between the Navy and Coast Guard to reduce and eliminate IUU fishing and effectively enforce fishing regulations across the Western Pacific.