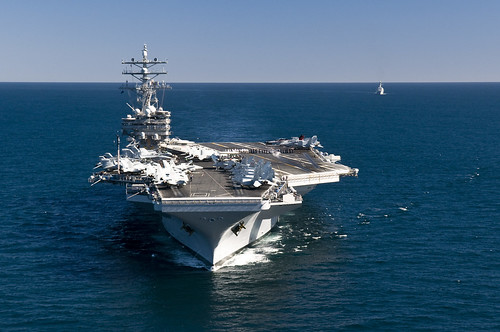 While in the 7th Fleet, the carrier strike group (CSG) will conduct exercises and port visits to enhance maritime partnerships and promote peace and stability in the region. The U.S. 7th Fleet AOR spans 48 million square miles, from the International Date Line to the Western Indian Ocean.

The strike group will participate in Foal Eagle, an annual field-training exercise designed to enhance combat readiness of Republic of Korea and U.S. supporting forces through combined training. The exercise highlights the longstanding military partnership and enduring friendship between the United States and Republic of Korea.

"We continue to seek opportunities to train and build partnerships with our allies," Girrier said. "We are looking forward to every opportunity to enhance our commitment to the region."

Ronald Reagan departed from its homeport in San Diego on Feb. 2, for a training exercise and its deployment to the 7th Fleet and U.S. Central Command area of responsibility. Ronald Regan's last deployment to 7th Fleet was in 2009.