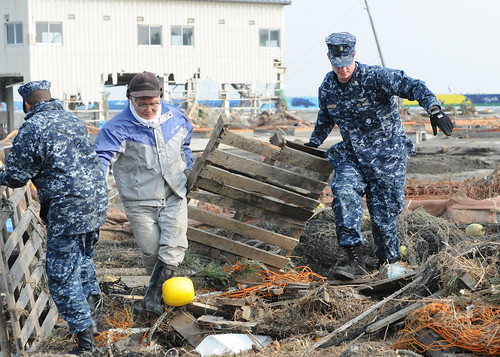 The clean up comes only days following an 8.9-magnitude earthquake, which triggered a tsunami along Japan's eastern coastline, resulting in severe damage to many Japanese coastal cities.

The damage to the fishing port was unexpected to Misawa Sailors due to the port's proximity to their base.

"It was an overwhelming when I fist saw the damage, but now that we are here, we will help in anyway possible," said Chief Master-at-Arms Bradley Dickey. "For the service member here in Misawa, this is our home too. We are here today to support our community, especially when things get tough."

Dickey also added that he was proud of his Sailors.

"I cannot say enough about the Sailors who gave their time out here today, they did an awesome job."

When the Sailors arrived, they split into groups and combed through the wreckage alongside Misawa city workers and local civilians. They cleaned up debris and salvaged any fishing equipment they found.

Masayoshi Sawaguchi, Director of Department of Policy and Finance for the Misawa city office, joined the relief effort and praised the Misawa Sailors for their support.

"We are very grateful for the participation today by the U.S. Navy," he said. "At City Hall, we are committed to solidarity with the base community and I believe the Sailors presence here today is a great symbol of that commitment and the alliance between the U.S. and Japan."

Demonstrating their appreciation, the city of Misawa provided lunch for the volunteers. NAFM Sailors said they were more than happy to spend their day cleaning up the port.

"After seeing everything on the news about the recent tragedy in Japan, many do not realize the path of destruction the earthquake made, we are very lucky," said Chief Construction Mechanic Michael Robb. " Today we are more than happy to be of service right in our own backyard. While the logistics were handled primarily by senior leadership, our junior guys are out here in full force and making a huge difference out here."

Operations Specialist 2nd Class Eric Tan said when the opportunity to assist in a relief effort arose, there was no question in mind to volunteer after experiencing the recent earthquake first-hand.

"I am very glad I got this chance," he added. "I am sure I am like many people around the world who want to help Japan in anyway possible. I hope to do more."