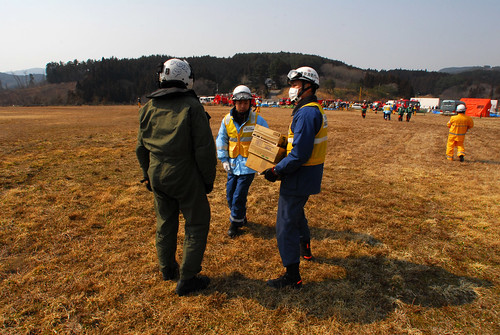 7th Fleet repositioned its ships and aircraft away from the Fukushima Dai-Ichi Nuclear Power Plant yesterday after detecting low level contamination in the air and on its aircraft operating in the area. As a precautionary measure, U.S. 7th Fleet ships conducting disaster response operations in the area moved out of the downwind direction from the site. Relief operations have since resumed north of Sendai. We will watch the winds closely in the coming days and move our ships and aircraft as necessary to avoid the windline from Fukushima.

Air operations today included 10 helicopters from Naval Air Facility Atsugi and USS Ronald Reagan identifying several groups of people in need of assistance in the vicinity of Minato, and delivering water, blankets and food. Additional helicopters conducted surveys of the at-sea debris field, and conducted search and rescue missions along the coastline.

USS Tortuga (LSD 46) with two heavy-lift MH-53 helicopters embarked, is steaming towards Tomokomai on the eastern coast of Hokkaido, where it will arrive tomorrow. There it will onload about 300 Japan Ground Self Defense Force personnel, and 90 vehicles, and deliver them to Aomori, on the northern end of Honshu.