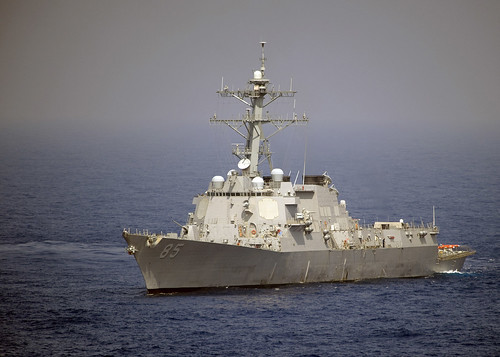 PACIFIC OCEAN (NNS) - USS McCampbell (DDG 85) was among the first U.S. Navy ships to move into position and offer assistance to Japanese citizens March 11, after the nation was struck by an earthquake and tsunami. Within hours of the disaster striking, McCampbell moved northeast along the coast of Japan towards areas that were most affected.

McCampbell patrolled waters off the coast of the Miyagi and Iwate Prefectures north of Sendai conducting search and rescue operations for survivors and stranded vessels. Helicopters attached to the ship also patrolled the shoreline helping provide the Navy with a better grasp of the situation on shore and what aid was immediately needed.

“The aerial view revealed massive destruction in the low-lying areas of the towns surveyed along the coast,” reported Lt. David Farrell.

There were countless Japanese citizens stranded in the area in need of food and shelter. In response to hearing the conditions in which the local population was stranded, the crew expressed a great desire to do more. McCampbell sailors were compelled to help their host nation as much as possible. Not only is Japan an important U.S. ally, but also home for McCampbell and her sailors. Many sailors have extended families that are settled throughout the Japanese islands.

“Japan has been my home for the past ten years. In the face of this disaster, there is nothing else I would rather be doing than aiding in the relief efforts,” said Ensign Brett Bittner.

The crew gave donations from their personal belongings that could be delivered to shore by the aircrew. McCampbell was able to deliver more than 1,500 pounds of much needed clothes, blankets, hygiene items, and food and water.

Additionally, over $8,000 was collected to purchase additional food and supplies from the ship’s store that may be contributed to the relief efforts.

“After identifying safe landing areas, in the areas of greatest need, our helicopter had the privilege of delivering desperately needed supplies to our Japanese friends,” said Lt. Farrell.

These donations were critical in providing immediate aid to victims stranded in areas not yet accessible by vehicle ashore while the larger relief effort was mobilized.

USS McCampbell Commanding Officer, Cmdr. Steven DeMoss, said “I am truly impressed by the generosity and depth of compassion that the crew has shown towards to our host nation of Japan and could not be more proud of their efforts. We will continue to do everything within our capability to help the Japanese overcome this disaster.”

McCampbell is one of seven Arleigh Burke-class destroyers assigned to Destroyer Squadron 15 and is forward-deployed to Yokosuka, Japan. McCampbell will remain on scene, continuing to provide assistance, as part of the overall humanitarian effort being conducted by U.S. 7th Fleet forces.