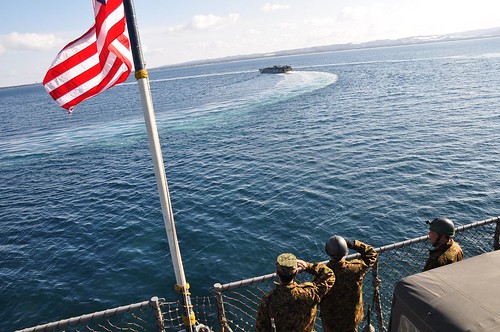 USS Tortuga (LSD 46) anchored early this morning in Ominato in northern Honshu, delivering 93 vehicles and 273 Japan Ground Self Defense Force ashore via Landing Craft Unit (LCU) transfer. The ship transported the soldiers and their vehicles from Tomakomai, Hokkaido, to assist with the disaster recovery efforts. The ship will also transport 5,000 bottles of water and 5,000 Meals Ready to Eat (MREs) to Misawa for further distribution to people in need.

USS Essex (LHD 2), USS Harpers Ferry (LSD 49) and USS Germantown (LSD 42) with the embarked 31st Marine Expeditionary Unit are in the Sea of Japan and will arrive off the coast of Akita prefecture tomorrow morning to await further tasking. Marines of the 31st MEU have established a Forward Control Element (FCE) in Yamagata. The west coast of Honshu affords greater access to undamaged ports and roads, fewer navigational hazards, and prevailing winds that are upwind of the Fukushima power plant.

Snow and poor visibility continued to limit helicopter operations today. Helicopters from the USS Ronald Reagan strike group and Carrier Airwing Five in Atsugi conducted 10 helicopter sorties today, delivering 10 tons of food and water to relief sites ashore. A total of 40 tons of aid has been delivered to date. Aircraft and surface ships also continued to conduct coastal search and rescue operations at sea and along the Miyagi and Iwate coasts.

USS Blue Ridge (LCC-19), flagship for the United States Seventh Fleet, conducted personnel and supply transfers in the vicinity of Okinawa this morning and is continuing north.

Carrier Airwing Five (CVW-5) began the relocation of more than 50 tactical fixed-wing aircraft normally assigned to USS George Washington from Naval Air Faculty (NAF) Atsugi to bases in Okinawa and Guam in order to free up more ramp space at Atsugi that might be need to support ongoing operations.

Helicopters from CVW-5 not currently deployed on ships will be moved in the coming days from Atsugi to Misawa Air Base in northern Honshu to place them in a position to respond more quickly to humanitarian missions.

100 Nuclear, Biological, Chemical (NBC) firefighting suits and masks were delivered from the USS George Washington to the Government of Japan this morning for use at the Fukushima power plant.

Five high-pressure water pumps from Sasebo were delivered to the Government of Japan for employment at the Fukushima power plant.