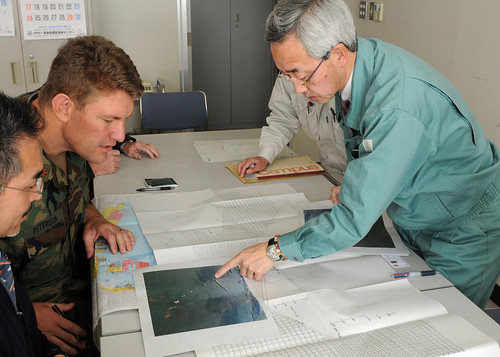 Lt. Cmdr. Derek Peterson met with the officials to discuss the salvage capabilities the U.S. Navy can provide in support of Operation Tomodachi.

Following a 9.0-magnitude earthquake, the port of Hachinohe suffered severe damage from the subsequent massive tsunami.

Peterson is a subject-matter-expert in salvage harbor clearance and the coordinator of the rescue and salvage ship USNS Safeguard (T-ARS 50). According to Peterson, the ship and its crew stand ready to assist in clearing out debris from the northern-Japanese harbor.

"We want to make our presence known to the Japanese and let them know that we are here to help," Peterson said. "We want to bring assets, capabilities, and work side-by-side with the Japanese on whatever they need."

Along with discussing Safeguard's capabilities, Peterson, members of the Japan coast guard, and city port authority officials looked over surveys and charts that displayed current conditions of the port. He also attended a meeting with city officials to gain a full understanding of city-wide recovery efforts.

"If given the opportunity, we are hoping to combine our resources and do whatever is needed to be done to help get the city back on its feet," Peterson said.

He said assisting the clean up and reopening of the port would benefit Japan by giving the country a key hub for delivery of humanitarian development assistance in this battered region.

"With this port reopened, humanitarian assistance possibilities from this port are limitless," he said.

After concluding the day's events, Peterson said he looks forward to the future possibility of working with the Japanese in their time of need.

"They are already doing an outstanding job with the equipment they have," he said. "If we have the opportunity to integrate into their system and provide support with our assets, it will only enhance relief productivity in the area and help get the job done."

For more news from Naval Air Facility Misawa, visit https://www.cnic.navy.mil/misawa/index.htm or check out our Facebook page at www.facebook.com/nafmisawa.