Essex ARG, 31st MEU Arrive Off the Coast of Japan 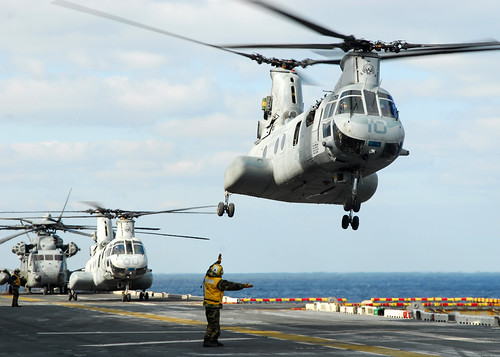 SEA OF JAPAN - Ships of the Essex Amphibious Ready Group (ARG) arrived off the west coast of mainland Japan March 18 in preparation to provide humanitarian assistance/disaster relief (HADR) support to the nation.

Shortly after arriving, helicopters from the 31st Marine Expeditionary Unit (MEU), conducted aerial reconnaissance of the Akita port area and surveyed available road networks and airfields to the east for potential supply routes and staging areas near the disaster zone.

A six-man forward command element of the 31st MEU went to Matsushima, Japan, in order to coordinate initial efforts for disaster aid planning with officials already on scene.

With more than 150 amphibious vehicles and 25 aircraft, the MEU is able to provide extensive distribution services by ground and air.

“This MEU is an organization ideally suited for humanitarian assistance in a coastal region such as this,” said Col. Andrew MacMannis, commanding officer of the 31st MEU. “We have aviation and amphibious platforms capable of rapid delivery of relief supplies, medical assistance, transportation assets and engineer equipment to an affected area, which could be of great assistance to those in need right now.”

ARG ships are capable of carrying out a variety of HADR operations using helicopters assigned to the 31st MEU and the Navy's Helicopter Sea Combat Squadron 25 or amphibious craft assigned to Beach Master Unit One and Assault Craft Unit One.

“The crew is very well prepared and highly trained,” said Capt. David Fluker, USS Essex (LHD 2) commanding officer. “We have reviewed and practiced our procedures to ensure we are ready to operate in this environment safely.”

The ships are capable of providing fresh water, medical contingency support, search-and- rescue support, heavy lift capabilities and amphibious crafts. Combining with the efforts of the Japan Self Defense Forces (JSDF), the crew is looking forward to helping its host nation during its time of need.

“I just could not be more proud of the crew and their eagerness to be involved as they always do when it comes time to help friends, partners and allies, specifically our host nation of Japan, in their time of need,” said Fluker.

USS Tortuga (LSD 46) is in the vicinity of Ominato in northern Honshu after delivering 93 vehicles and 273 Japan Ground Self Defense Force ashore via landing craft yesterday. The ship transported the soldiers and their vehicles from Tomakomai, Hokkaido to assist with the disaster recovery efforts. The ship will also transport 5,000 bottles of water and 5,000 Meals Ready to Eat (MREs) to Misawa for further distribution to people in need.