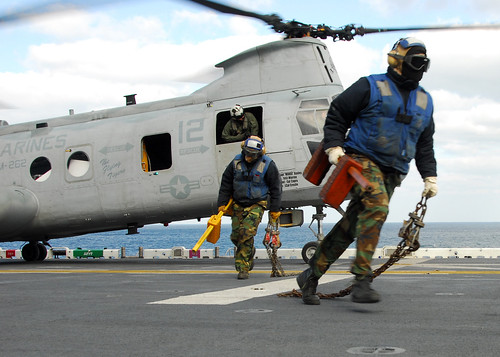 USS BLUE RIDGE, At Sea (March 18, 2011) - At 2:46 this afternoon, U.S. Seventh Fleet personnel embarked on the USS Blue Ridge (LCC-19) along with Japan Self Defense Forces personnel throughout Japan, observed a moment of silence marking one week since that a 9.0 mega-earthquake struck off the eastern shore of Honshu. The moment of silence also marked a transition in mission as Japan ended rescue efforts and took on a new mission of sustaining life. Seventh Fleet remains committed to this relief effort, with 12,750 personnel, 20 ships, and 140 aircraft participating in Operation Tomodachi. Seventh Fleet forces have delivered a total of 81 tons of relief supplies to date.

After offloading Japan Ground Self Defense Force personnel and vehicles in Ominato, USS Tortuga (LSD 46) departed en route the vicinity of Hachinohe where she will serve as an afloat forward service base for helicopter operations. CH-53 Sea Stallion aircraft from HM-14 attached to Tortuga delivered 13 tons of humanitarian aid cargo, including 5000 pounds of water and 5000 Meals Ready to Eat (MREs), to Yamada Station, 80 miles south of Misawa.

USS Essex (LHD 2), USS Harpers Ferry (LSD 49) and USS Germantown (LSD 42) with the embarked 31st Marine Expeditionary Unit arrived off the coast of Akita prefecture this afternoon. Marines of the 31st MEU continue have established a Forward Control Element (FCE) in Matsushima in order to coordinate disaster aid planning with officials already on scene. They will move to Sendai tomorrow.

Helicopters from HS-4 and HSL-43 with the USS Ronald Reagan strike group, and HSL-51 from Carrier Airwing Five in Atsugi, delivered 28 tons of food, water, clothes, medicine, toiletries, baby supplies, and much needed kerosene to displaced persons at fifteen relief sites ashore. For two of the relief sites serviced today, it was the first humanitarian aid they have received since the tsunami a week ago. Eight of the sites serviced made requests for specific aid, including a need for a medical professional.

Carrier Airwing Five (CVW-5) completed the relocation of 14 rotary-wing aircraft normally assigned to USS George Washington from Naval Air Faculty (NAF) Atsugi to Misawa Air Base in northern Honshu. The aircraft are now positioned for quick response to humanitarian mission in northeastern Honshu. Additionally, CVW-5 tactical aircraft which are non-essential to the relief mission have been relocated to bases in Okinawa and Guam in order to open ramp space at Atsugi.

USS Cowpens (CG-63) continued its northerly track to rendezvous with the Ronald Reagan Carrier Strike Group. Cowpens is expected to join the Strike Group overnight. USS Shiloh (CG-67) got underway from Yokosuka to deliver relief supplies to the Strike Group.

USS Blue Ridge (LCC-19), flagship for the United States Seventh Fleet, remained in the vicinity of Okinawa to conduct transfers of supplies and additional personnel to augment the staff.

Two P-3 Orion aircraft from Patrol Squadron Four (VP-4) conducted two aerial survey missions or ports and airfields in northern Honshu today. CTF-72 embarked two liaison officers from the Japan Maritime Self Defense Force on each mission. Aerial imagery captured on these missions is shared with Japan. VP-4 has established a detachment in Misawa with two aircraft and four aircrews.