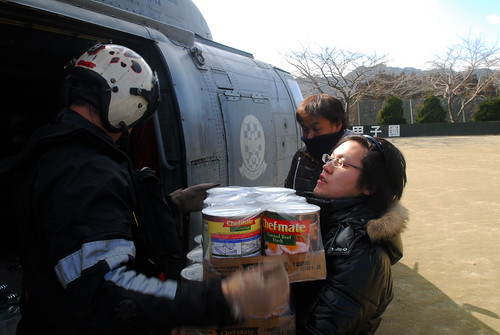 The Warlords of HSL-51, Black Knights of HS-4, and Battlecats of HSL-43 continued Humanitarian Aid and Disaster Relief efforts by delivering 29 tons of aid from ships of the Ronald Reagan Carrier Strike Group to locations ashore. Helicopters rendered much needed materials to Hachinohe airport as well as landing zones that mark shelters for displaced persons. Hachinohe serves as a staging point for further distribution of aid.

Food, water, and warm clothing continue to top the list of delivery priorities. As large shipments of perishable food like hotdogs and hamburgers arrive for distribution, helicopter crews work closely amongst one another and Japan Ground Self Defense Force to ensure delivery to larger, more populated sites in order to avoid spoilage.

Helicopter crews reported that three sites visited today required no assistance - a positive sign that ground-based relief efforts are starting to meet the needs of displaced persons. They also report an increased presence of Japan Ground Self Defense Force and medium to heavy equipment at such sites.

USS Tortuga (LSD 46) is off the coast of Hachinohe serving as an afloat forward service base for helicopter operations.

USS Essex (LHD 2), USS Harpers Ferry (LSD 49) and USS Germantown (LSD 42) remained off the coast of Akita prefecture this afternoon. The Essex Amphibious Ready Group (ARG) will depart Akita tomorrow and reposition in the vicinity Kamaishi-ko in northeast Japan. In the coming days, the ARG and the Marines of the 31st Marine Expeditionary Unit are expected to focus their efforts in this area, utilizing heavy-lift helicopters to deliver relief items ashore.

Many families of Seventh Fleet Sailors in Yokosuka are making preparations to depart voluntarily as part of the Military Assisted Departure for Department of Defense personnel.

Ships report sighting much less debris at sea now, unlike a week ago when large debris fields as far as 20 nautical miles offshore made navigating around houses, shipping containers, capsized boats, and trees difficult.

Imagery analysts on USS Ronald Reagan carefully reviewed over 45,000 photographs taken by the Shared Reconnaissance Pod (SHARP) on F/A-18 aircraft, finding no "SOS" marks or other signals of distress, and no other groups of isolated people not already identified.

USS Blue Ridge (LCC-19), flagship for the United States Seventh Fleet, remains in the vicinity of Okinawa to conduct transfers of supplies and personnel to augment the staff.