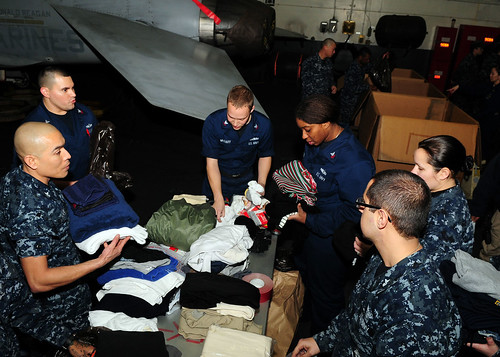 Ronald Reagan is currently off the northeast coast of Japan's Honshu island to provide assistance to people affected by the 9.0 magnitude earthquake which resulted in a devastating tsunami, while playing a supporting role in Operation Tomodachi.

When the call for donations went out across the strike group, the response was overwhelming Harts said.

The items were transported to various landing zones throughout the Aomori Prefecture by crew members of embarked Helicopter Anti-Submarine Squadron (HS) 4.

A volunteer led collection point was set up in the hangar bay of Ronald Reagan where Sailors and Marines dropped off personal items they had aboard with them or had purchased from the ship’s store. “Not all of us have the opportunity to go ashore,” said Air-Traffic Controller 3rd Class Wendy Stephens, a Ronald Reagan Sailor who volunteered her time to help collect donated items. “It feels good to be able to help out the people of Japan.”

“We have only been doing this a few hours and we have already filled four helos with things donated by Reagan Sailors,” said Yeoman 1st Class Delesa Kwon-Lis. She also said that the Ronald Reagan First Class Association, 3rd and 2nd Class Petty Officer Association and Bluejackets Association have been key volunteers in the donation effort.

“The outpouring of donations and the spirit of this Ronald Reagan team is eye watering,” said Schwanke.

According to Schwanke’s list of donations, Reagan Sailors even donated over 20 stuffed animals for children.

Harts said he donated a Curious George doll that his children had stuffed into his seabag before embarking from San Diego.

“My family and I served in Japan during a previous assignment and when my young children heard about the disaster they were very upset,” he said. “They asked if George could go ashore and live with children who may have lost all their toys,” Harts said.

Reagan’a Sailors and Marines have been very eager to be a part of the donation effort Hart said.

“The combined effort of every member of the Ronald Reagan Strike Group has contributed to saving lives.” Hart explained. “The Navy’s new slogan ‘A Global Force for Good’ has been proven yet again.”