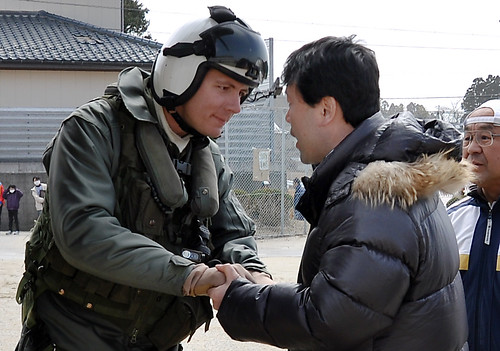 USS BLUE RIDGE, At Sea (March 21, 2011) - A total of 12,750 personnel, 20 ships, and 140 aircraft of U.S. 7th Fleet are continuing to participate in Operation Tomodachi. Today, utilizing 14 helicopters, the fleet delivered more than 47 tons of relief supplies bringing the total of aid delivered to Japan since the beginning of the crisis to 227 tons.

USS Harpers Ferry (LSD 49), USS Germantown (LSD 42), USS Tortuga (LSD 46) along with USS Essex (LHD 2) and the embarked 31st Marine Expeditionary Unit are off the coast near Hachinohe to assist humanitarian aid efforts along the affected northeastern coast to reach people in remote areas where the tsunami hit hardest. Ships of the Essex ARG conducted underway replenishment today with the USNS Matthew Perry.

A P-3 from VP-4 deployed to Misawa conducted reconnaissance of coastal areas to continue the search for displaced people and to find new landing zones to service them.

USS George Washington got underway from Yokosuka today to assure the ship can sustain a state of readiness in the long term for the defense of Japan. The forward deployed carrier is scheduled to remain in the local waters off Japan. Moving USS George Washington is a precaution given the capabilities of the vessel and the complex nature of this disaster. USS Lassen also departed Yokosuka today.

The commander, U.S. Pacific Command, directed that precautionary measures be taken due to the potential of future radiological exposures, including directing the distribution of potassium iodide (KI) tablets to military personnel and their families in Yokosuka and Atsugi. Personnel in Yokosuka and Atsugi will not actually take KI unless advised to do so by U.S. or Japanese authorities. Seventh Fleet personnel conducting disaster relief missions inside of 100 nautical miles from the Fukushima Dai-Ichi plant continue to take KI as a precautionary measure.

Families of Seventh Fleet Sailors are continuing to voluntarily depart Yokosuka and Atsugi as part of the Military Assisted Departure for Department of Defense personnel.