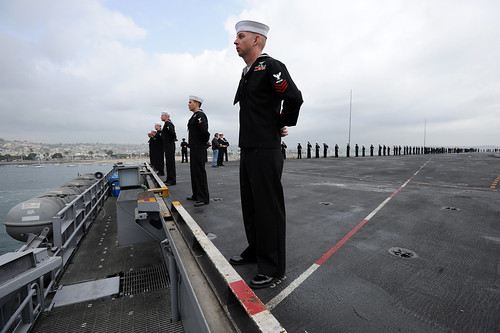 "The people of this community and Americans across this great nation can be extremely proud of Lincoln's accomplishments," said Capt. John D. Alexander, Lincoln's commanding officer. "Six-and-a-half months ago we departed these shores to make the world a more secure and peaceful place for our families and children. We return proud of our accomplishments and humbled to be part of something bigger than ourselves."

In addition to supporting its primary missions throughout the deployment, Abraham Lincoln completed the following:

The air wing squadrons of CVW-2 include the "Bounty Hunters" of Strike Fighter Squadron (VFA) 2, the "Vigilantes" of VFA-151, the "Kestrels" of VFA-137, the "Blue Blasters" of VFA-34, the "Sun Kings" of Carrier Airborne Early Warning Squadron (VAW) 116, the "Lancers" of Tactical Electronic Warfare Squadron (VAQ) 131, the "Providers" of Fleet Logistics Support Squadron (VRC) 30, the "Golden Falcons" of Helicopter Sea Combat Squadron (HSC) 12 and the "Saberhawks" of Helicopter Maritime Strike Squadron (HSM) 77.