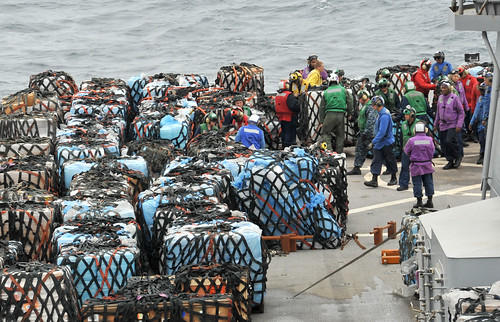 USS BLUE RIDGE, At Sea (March 22, 2011) - A total of 19 ships, 140 aircraft and 19,703 Sailors and Marines of the U.S. 7th Fleet continued to conduct Operation Tomodachi relief operations. To date the Navy has made 349 deliveries of humanitarian assistance and disaster relief supplies to 84 landing sites.

Sailors and Marines aboard USS Ronald Reagan (CVN 76), USS Chancellorsville (CG 62), USS Preble (DDG 88) and the ships from Destroyer Squadron 15 collected personal donations from the crews to supply displaced Japanese citizens with essential goods for survival. The items were transported to various landing zones throughout the Aomori Prefecture by crew members of embarked Helicopter Anti-Submarine Squadron (HS) 4. More than 100 blankets, 237 pants, 450 shirts, 311 jackets and sweaters, 748 pairs of socks, 154 towels, 57 pairs of shoes, 166 undergarments, 76 hats, 8 scarves, and 34 pairs of gloves were donated in just a few hours. Sailors even donated over 20 stuffed animals for children.

Commander Task Force 76 developed port clearance plans for the Hachinohe port. USNS Safeguard is enroute Hachinohe to assist the Japan Maritime Self Defense Force with clearing debris from the port.

USS Blue Ridge (LCC-19), flagship for the United States Seventh Fleet, remains in the vicinity of Okinawa to conduct transfers of supplies and personnel to augment the staff.

USS George Washington is operating at sea near Shikoku. USS Lassen is proceeding towards Sasebo where it will continue its maintenance availability.

Families of Seventh Fleet Sailors are continuing to voluntarily depart Yokosuka and Atsugi as part of the Military Assisted Departure for Department of Defense personnel. U.S. Pacific Command leader Adm. Robert Willard addressed residents at a town hall meeting in Yokosuka this evening.