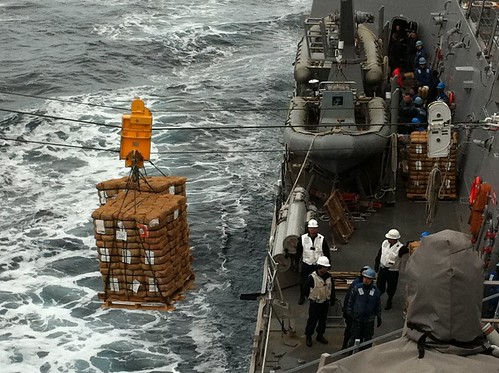 McCampbell Sailors moved tons of materials ashore to the civilian population in some of the hardest struck areas, as displaced Japanese continue to have a critical need for food, supplies and fuel.

Over a period of more than two hours, McCampbell took on 45 pallets of food and supplies from USNS Matthew Perry (T-AKE 9) to prepare for a new wave of emergency provisions, and move them to the Japanese ashore.

“It was incredible to watch the pallets swing across between our two ships and know all of these supplies were going ashore soon, to help our Japanese friends,” said Seaman Cyd M. Vargas of Aguada, Puerto Rico.

The crew worked in near freezing temperatures to bring an abnormally large amount of supplies aboard.

“The crew pulled together to on load nearly three times the normal amount of supplies in support of HADR operations ashore,” said Ensign Thad Brill of McMinnville, Oregon, the Assistant Supply Officer aboard McCampbell. “These items will greatly help to sustain the victims ashore.”

Helicopter Anti-Submarine Squadron Light (HSL) 51 Detachment 5 the “Warlords” embarked on board McCampbell, will be transferring needed supplies to shore over the next few days based on information gathered during previous drops at established shelters. The air crew customizes the loads to various sizes and content in order to best suit the needs for each group of survivors. Aware that there may be additional groups with needs, the air crew is constantly vigilant to identify additional previously unestablished shelters.

Sailors have been working tirelessly to ensure that all available resources are getting ashore in a timely manner since arriving on scene arch 11, immediately following a magnitude 9.0 earthquake and resulting tsunami.

USS McCampbell Commanding Officer, Cmdr. Steven H. DeMoss said, “McCampbell and nearly every U.S. Navy ship forward-deployed to Yokosuka and Sasebo, Japan have joined with the Reagan Strike Group to support disaster relief ashore. There is a tremendous commitment by our nation and our Navy to ensure Japan overcomes and recovers from this tragedy.”

McCampbell is one of seven Arleigh Burke-class destroyers assigned to Destroyer Squadron Fifteen and is forward-deployed to Yokosuka, Japan. McCampbell will remain on scene, continuing to provide assistance, as part of the overall humanitarian effort being conducted by U.S. Navy 7th Fleet Forces.