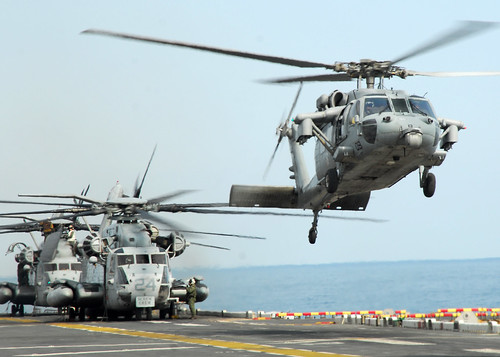 The Essex Amphibious Ready Group (ARG) began aiding Japan March 20 in response to the 9.0-magnitude earthquake and subsequent tsunami March 11. So far, Sailors and Marines have delivered more than 20,000 pounds of supplies.

"We are conducting daily HADR operations to ease the suffering of those affected by the tsunami on Honshu Island," said Capt. David Fluker, Essex commanding officer. "I hope that when we are finished, those in need are a little warmer and a little more comfortable. The Essex team will continue to deliver whatever support is necessary."

The supplies include blankets, potable water and a variety of health and comfort packages. Essex combat cargo Marines are working daily to move supplies onto the flight deck, where they are loaded into CH-53E Sea Stallions and CH-46E Sea Knights assigned to Marine Medium Helicopter Squadron 262 (HMM-262) for delivery ashore.

“The mission we are doing here in Japan is like helping out my second home,” said Gunnery Sgt. Sam Carnes, HMM-262’s quality assurance chief. “My wife is from Okinawa, and I have spent nine years of my career stationed in Okinawa.”

Carnes is part of a CH-46E Sea Knight flight crew and, since March 20, has helped transport thousands of pounds of supplies to Miyako, Japan, where Japan Maritime Self-Defense Force members have been standing by to help unload and deliver the supplies.

“The JSDF (Japan Self-Defense Force) is a very capable and professional organization,” said Carnes. “They were able to assist in aircraft offload efficiently and in a timely manner to enable us to make multiple trips.”

To gain situational awareness and open lines of communication for potential HADR tasking, Essex is coordinating with a forward command element located in Sendai, Japan, as well as liaison officers at the maritime response cell located at Yokota Air Base.

“I’m very proud of the effort our Sailors and Marines have been putting forth, but I’m also grateful to their family members that are still in Japan,” said Fluker. “Communication and support from them has been essential for maintaining readiness.”

Essex and the dock landing ships USS Harpers Ferry (LSD 49), USS Germantown (LSD 42) and USS Tortuga (LSD 46) are operating off the coast of Hachinohe, Japan. The ARG and 31st MEU are expected to continue to focus their efforts in this area, using heavy-lift helicopters to deliver relief items ashore.