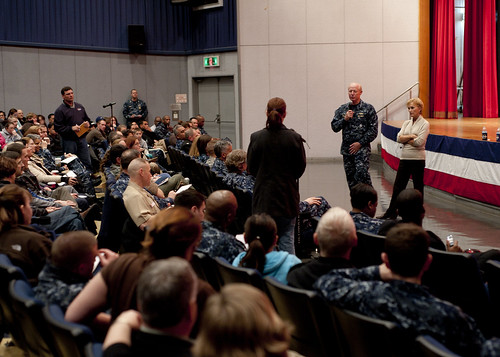 Commander, U.S. Pacific Command, Adm. Robert Willard, along with his wife Donna Willard, addressed the community on the current situation with the Fukushima nuclear-power plants, voluntary departure of dependents, and thanked families for their support to their Sailors who are fully engaged in Operation Tomodachi.

“The purpose of my visit to Japan was multi-faceted,” said Willard. “I needed to talk to my forces out here that are conducting the humanitarian assistance and disaster relief operation, in northern Honshu, to help the Japanese. So, I’m working the disaster side of this, but while we’re here Donna and I both wanted the opportunity to visit the sites, interact with the families, and perhaps share some information that would be helpful under these circumstances,” he added.

Willard began the meeting reassuring the community that leadership at all levels has the safety of service members and their families at their top priority. He also put the conditions of northeastern Japan into perspective.

“Just imagine 440,000 people that are in an area where infrastructure is pretty much destroyed, and more than one thousand roads are gone. There’s no power, no water and people are relying on relief efforts that we are assisting in,” Willard told the crowd of approximately 700 people.

He also addressed the Japanese members of the audience and expressed his concern for the people of Japan and praised the courage they have displayed throughout catastrophic circumstances.

“From all of us in America, and from all of us in the United States military, and in the Pacific Command, I would like to express our profound condolences for what your country is enduring.”

To help share information during the meeting, Willard held a question and answer session with community members to address community concerns.

“We couldn’t have been happier with the turnout and with the questions. I learned a lot and I hope they got a lot out of it as well,” said Willard. “Their safety is paramount on our minds. My responsibility is to manage that safety, look out for any future contingency that could occur, and to keep them informed.”

Willard reiterated to the local commanders the importance of communications in keeping the community assured by keeping them informed.

“For the leaders that are here, keep leading keep supplying the information that’s required as we go about this great humanitarian assistance and disaster response effort,” stated Willard. “To the families here, we’re very, very proud of what they’re doing, the courage they’re showing, and the help that they are affording one another.”

Though Willard addressed the Yokosuka community concerns, he also, in addition, spoke of the catastrophes that the Japanese people are enduring.

“The Japanese people, I think, have shown just wonderful resilience and fortitude under the worst circumstances,” Willard expressed. “I know I speak for every American and every military member that we are very, very sorry for this great disaster that they’ve been subjected to.”