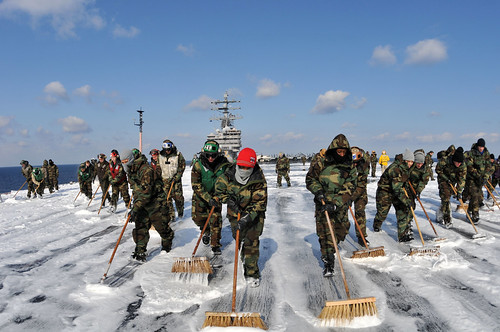 USS Ronald Reagan took a pause from flight operations today in order to conduct a fresh water washdown on its flight deck and embarked aircraft to remove any remaining traces of radioactive contamination from the Fukushima Dai-Ichi plant that might have been deposited while conducting disaster relief operations over the past 11 days. Other ships of the strike group, to include USS Chancellorsville (CG 62), USS Preble (DDG 88), USS Fitzgerald (DDG 62), USS McCampbell (DDG 85), USS Mustin (DDG 89) and USS Curtis Wilbur (DDG 54) along with USS Cowpens (CG-63) and USS Shiloh (CG-67) continued to operate in the vicinity of Sendai, conducting coastal reconnaissance and delivering seven tons of supplies to twelve different sites.

Weather provided challenges today, allowing flight crews to reach only 12 landing zones due to snow and heavy rain. In a positive development, 25 landing sites of the total of 68 were taken off the list of landing sites for the U.S. after being identified by Japanese Self Defense Force as no longer needing aid or being fully serviced by JSDF.

Commander Task Force 76 conducted beach landing site surveys, and developed plans for dive operations and port clearance for the Hachinohe port by U.S. and JMSDF divers. As many as 700 industrial shipping containers and 200 fishing vessels are missing from the area, and many may pose a hazard to safe navigation in the port. USNS Safeguard with the embarked Mobile Diving Salvage Unit One arrive in Hachinohe tomorrow to assist with clearing debris from the harbor.

A P-3 “Orion” from VP-4 surveyed and took imagery of infrastructure in the Ofunato port, and seacrhed for displaced or isolated people. The imagery, which revealed extensive damage to infrastructure, was shared with the Japan Self Defense Force.

USS Essex (LHD 2) ARG with USS Harpers Ferry (LSD 49), USS Germantown (LSD 42), USS Tortuga (LSD 46) conducted operations in the vicinity of Hachinohe, with its embarked helicopters delivering supplies to three sites. An additional three sites were not able to be reached due to poor weather.

USS Blue Ridge (LCC-19), flagship for the United States Seventh Fleet, will arrive in White Beach, Okinawa, tomorrow to onload supplies and additional personnel to augment the staff, and to debark the 7th Fleet Band, who will move to Sasebo to conduct a series of performances there in the coming weeks.

Families of Seventh Fleet Sailors are continuing to voluntarily depart Yokosuka and Atsugi as part of the Military Assisted Departure for Department of Defense personnel.