Three Disasters in One 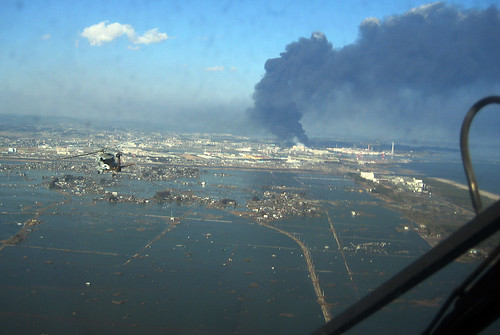 SENDAI, Japan (March 12, 2011) An SH-60B helicopter assigned to the Chargers of Helicopter Antisubmarine Squadron (HS) 14 from Naval Air Facility Atsugi flies over the city of Sendai to deliver more than 1,500 pounds of food to survivors of an 8.9 magnitude earthquake and a tsunami. (U.S. Navy photo)

PACIFIC OCEAN (March 24, 2011) - The men and women of the U.S. 7th Fleet and the Japan Maritime Self Defense Force continue to inspire me with their selfless efforts to help the people of Japan during this extremely challenging and complex humanitarian disaster. Since arriving on scene two days after the terrible earthquake and tsunami that struck on March 11, 7th Fleet forces have supported JMSDF efforts by delivering more than 200 tons of relief supplies to 40 sites across northern Honshu.

This is without a doubt the most complex humanitarian mission ever conducted. It is not one disaster, but three: an earthquake, a tsunami, and a crisis at a nuclear power plant, made even more complicated by heavy weather that hampers visibility. We have put the full power of the 7th Fleet into assisting with this tragic situation, with 20 ships, 140 aircraft and more than 19,000 Sailors and Marines working in support of the Japan Self Defense Forces by delivering relief supplies ashore, surveying and clearing ports, providing logistical support to rescuers, and conducting aerial searches and surveys to help inform their efforts.

But our efforts in this operation pale in comparison to those of the Japan Self Defense Forces. They have mobilized more than 100,000 personnel, including their entire Self Defense Fleet, to support this Herculean effort. They have proven to the world their perseverance and dedication to this mission, and their devotion to the people of Japan.

Later today I will meet with Vice Admiral Kuramoto and Vice Admiral Takashima, my JMSDF counterparts in this effort. Since Operation Tomodachi started, he and I have talked daily to help us focus and refine our efforts in support of them. Drawing upon the strong friendship and long experience we have working with the JMSDF in exercises and training under our alliance, we had the benefit of starting this operation with trust and interoperability already firmly in place. These strong working relationships with the JMSDF exist between our personnel at all levels, including my Task Force commanders, unit commanders, and staffs.

Coordinating just the U.S. Navy portion of an operation of this magnitude is no easy task. My staff, embarked on USS Blue Ridge, has been working around the clock to conduct operational planning, command and control of our forces, coordination and deconfliction of missions, and management of information for operational decision making as the Joint Force Maritime Component Commander, or JFMCC, under the Joint Task Force commander for Operation Tomodachi, Lieutenant General Burt Field at U.S. Forces Japan. All the while, the 7th Fleet staff has stayed on top of other fleet operations around the region, including Korea, the Indian Ocean and Southeast Asia.

While executing this mission, we have been particularly mindful of our loved ones back in Yokosuka and Atsugi. Many are leaving Japan under voluntary departure. But many are also choosing to stay. Either way, they are being assisted through this difficult process by our talented team at Naval Forces Japan under Rear Admiral Rick Wren. Japan is their home, and they want to return as soon as possible.