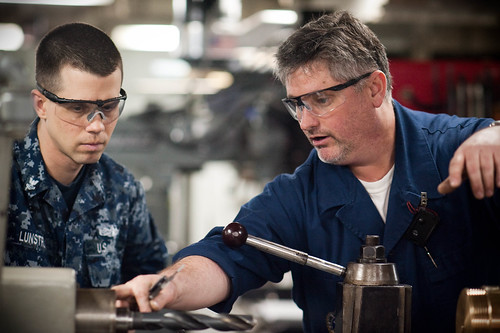 Among the 450 PSNS workers currently aboard the ship are five Mater Craftsmen who alone, bring more than 130 years of combined experience to the ship’s Machine Repairman shop. “When I was a machinist in the Navy many years ago, I was trained on many practical skills that are not passed down nowadays,” said Dale Brown, a PSNS tool maker. “It feels good to get back to my roots as a Sailor and help develop these young guys into better machinists and teach them techniques that they might not otherwise learn.”

The PSNS workers are underway with George Washington due to the March 11 earthquake and tsunami and the complex nature of the ensuing aftermath. The Navy’s only permanently forward deployed aircraft carrier pulled out from her homeport of Yokosuka, Japan on March 21 as a precautionary measure to ensure she can sustain a state of readiness in the long term defense of Japan.

“As conditions at the Fukushima Dai-ichi plant deteriorated, it was crucial that we brought the skilled workers along with us to sea,” said George Washington’s Executive Officer Capt. Kenneth Reynard.

“Over this maintenance period they have become our extended family and are now assisting us with upkeep and operational readiness while at sea.”

Not too long after declaring ‘anchors aweigh’, many of the PSNS workers immediately began putting their years of experience and skills to use.

“I’ve really enjoyed passing down my knowledge to these young Sailors—they’re like sponges. I’m happy to also be learning from them, too,” said Jeff Messner, a PSNS machinery foreman. “We’ve taught them new ways of using their equipment and some of their tools that’ll make their lives easier from now on.”

George Washington’s turnaround from an in port maintenance period to being underway in only 10 days is an “unprecedented accomplishment,” said the ship’s commanding officer, Capt. David A. Lausman, who added his now combined crew of Sailors and civilians is a golden opportunity.

“These civilian shipyard workers bring to George Washington a lifetime of experience. While we are underway, we’re taking full advantage of this unusual situation so our stellar Sailors can be even better at their jobs tomorrow.”

From laying new tile to installing lagging, PSNS workers and Sailors are working side by side doing hundreds of jobs, proving routine maintenance doesn’t always have to take place in port.

“The PSNS guys are doing a great job assisting my crew with backed up jobs that once cleared, would help make this ship a more enjoyable place,” said Chief Machinery Repairman Robert Working. “Something as simple as laundry can have a huge impact on our crew’s morale, so getting it up and running at 100 percent is important to us.”

Back inside of the Machine Repairman shop, the all too familiar sound of drills, lathes and metal grinding provides comfort to the displaced shipyard workers. For those who have never been to sea before, it eases the seasickness. And for those who call Japan their home, their work aboard George Washington allows them to find something positive out of a tragedy that claimed so many lives.