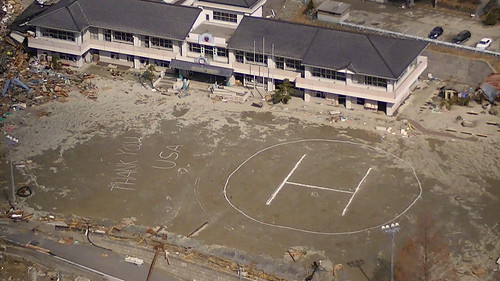 Commander Task Force 76 (CTF 76) conducted diving operations in Hachinohe investigating the harbor area and also the Liquid Natural Gas (LNG) pier. USNS Safeguard with the embarked Mobile Diving Salvage Unit One arrived in Hachinohe to assist with clearing debris from the harbor. In the days ahead both Safeguard and USS Tortuga (LSD 46) will work with Japan Maritime Self Defense Force (JMSDF) and local authorities to clear the ports at Hachinohe, Miyako, Kamaishi, Ofonato, and Sendai from debris and other navigational hazards. In Hachinohe alone there are 700 shipping containers and 200 fishing boats that are missing, many of which are sunk and could impede ships from safely entering or leaving the harbor.

Seventh Fleet continues to align its efforts in support of the Japan Self Defense Forces. To further coordinate delivery of relief supplies between the forces, a three man liaison officer team from the 31st Maritime Expeditionary Unit (MEU) will join the 4th Division Japan Ground Self Defense Force, while similar team of liaison officers from the 4th Division JGSDF will join the 31st MEU.

USNS Carl Brashear (T-AKE-7) conducted replenishment with the USS Ronald Reagan (CVN 76) today, transferring fuel, shipboard supplies and160 Pallets of HADR supplies. The Brashear also provided 30 pallets of HADR supplies to the USS Fitzgerald (DDG 62) and 15 pallets to the USS Cowpens (CG 63) in the Reagan Strike Group. These supplies will be distributed over the next few days.

USS Curtis Wilbur broke away from operations today to return to Yokosuka for resupply.

USNS Rappahannack (T-AO-204) and USNS Mathew Perry (T-AKE-9) have distributed all available Humanitarian Assistance and Disaster Relief supplies as well as shipboard stores and fuel and are en route Sasebo to replenish both.

A P-3 “Orion” aircraft from Misawa took Electro Optical (EO) images of areas in and around Hachinohe, Kuji, Shimanokoshi, Omoto, Taro, Miyako, Kamaishi and Ofunato, finding three new landing zones with groups of displaced people. All imagery from these flights is shared with the Japan Self Defense Forces.

Two U.S. Navy barges, each capable of containing 350,000 gallons of fresh water, are being prepared and filled at Yokosuka for possible transport to the Fukushima Dai-Ichi nuclear plant if needed for the ongoing efforts to cool the damaged reactors.

USS Blue Ridge (LCC-19), flagship for the United States Seventh Fleet, arrived in White Beach, Okinawa, to onload supplies and additional personnel to augment the staff. The 7th Fleet Band debarked Blue Ridge to move to Sasebo and conduct a series of performances there in the coming weeks.

During the 11 days since Operation Tomodachi started, U.S. 7th Fleet forces have delivered 438,645 lbs. of humanitarian assistance and disaster relief supplies to survivors of the tsunami and earthquake, in support of Japan Self Defense Force efforts.