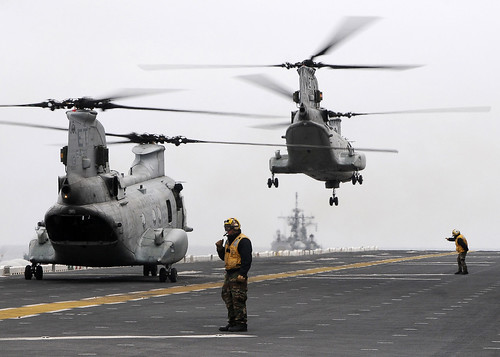 To help ensure a smooth and expedient recovery effort, the forward-deployed amphibious assault ship USS Essex (LHD 2) embarked an officer from the Japanese Maritime Self Defense Force (JMSDF) to assist with HADR efforts. Working with the staff of Commander, Amphibious Squadron 11 (CPR-11), Lt. Hiroaki Tanaka serves as a liaison between Essex and Japanese forces in the area.

Serving as the ship planning officer with the Yokosuka-based Communications Commander Force One (CCF-1), Tanaka was flown from the JMSDF’s helicopter destroyer JS Hyuga (DDH 181), which is currently serving as the command ship for CCF-1.

“I serve as the communications officer between the Essex and CCF1,” Tanaka said. “My job is to help coordinate humanitarian relief efforts between the ship, CCF1 and Japanese relief efforts on the ground. I communicate the needs of the Japanese people affected by the earthquake and tsunami to the ship for helo operations and supplies.”

Tanaka said he works long hours, but knowing he is helping to provide help for those in need keeps him motivated. Speaking on behalf of Japan, he said the citizens of Japan expressed gratitude for the hard work and care exhibited by U.S. ships such as Essex.

“Thank you,” he said. “We are extremely thankful for your help and cooperation. I will never forget all the help you have done for us. I am forever a member of the Essex crew.”

CPR-11 Future Operations Officer Lt. Justin Jomoto said having Tanaka aboard the ship has been essential to coordinating HADR operations.

“It’s been very helpful having him serve with us,” he said. "He streamlined the process for coordinating with CCF 1, which has been a key part in getting our humanitarian supplies to the Japanese people in need."

As of March 25, Seventh Fleet forces continued sustainment of life efforts in support of Operation Tomodachi. Currently, 19 ships, 140 aircraft and 18,282 personnel are in the area of operation. In the past 24 hours, the fleet scheduled 22 aid flights for HADR supply deliveries.

The Essex ARG is comprised of the forward-deployed amphibious assault ship Essex and the dock landing ships USS Harpers Ferry (LSD 49), USS Germantown (LSD 42), and USS Tortuga (LSD 46). Essex is currently off the coast of Japan to conduct HADR operations as directed in support of Operation Tomodachi.