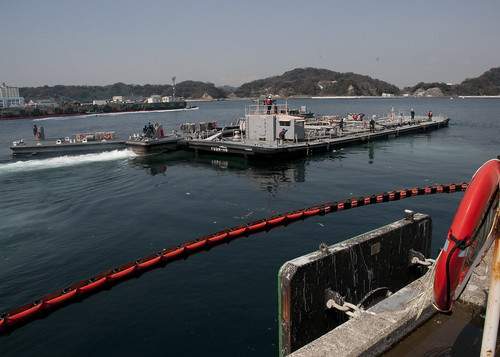 A total of 1.89 million litres (500,000 gallons) are being distributed between the barges that have been cleaned of fuel to support fresh water. The first Barge YOGN-115 departed CFAY at approximately 11:00 a.m. and will be escorted by a Japan Maritime Self Defense Force multipurpose support ship JS Hiuchi (AMS 4302). The second barge is scheduled to leave within the next 24 to 48 hours. The water will eventually be used to replace the seawater currently being used in cooling efforts at the plant.

“We have two barges here,” said CFAY Operations Officer Lt. Cdr. Michael Weatherford. “They can both hold up to approximately 300,000 gallons of fresh water each. But the max capacity is reduced to make the barges seaworthy for ocean travel,” Weatherford explained. “The request was for one million gallons so when I told them we could get 500,000 gallons we started working on getting these barges released from our custody over to the [Japan Maritime Self Defense Force].”

Officers from the JMSDF were present on the pier to watch workers finish the final preparations before the barges left.

“This method was planned by the Japanese government after holding a council with Tokyo Electric Power Company (TEPCO) and others,” said JMSDF officer, Capt. Fumiyuki Kitagawa. “After having a discussion with other ministries and agencies, [the Japanese government] decided to have Japan Maritime Self Defense to carry barges to Fukushima this time.”

“Once it leaves Yokosuka, we figure about seven knots travel speed because it’s going to be towed by the JMSDF in the open ocean,” said Weatherford. “We’re estimating that it should reach its destination about 50 kilometers south of Fukushima within 35 hours from departure.”

After watching the barge leave, Kitagawa had a personal message for the people that had helped make this event happen.

“I would like to take this opportunity to thank all Americans and the U.S. Navy personnel who provided us with prompt response in the wake of the earthquake. Japan Maritime Self-Defense Force (JMSDF) and the U.S. Naval ships off the coast of Sanriku are still searching for the missing people and delivering foods to the victims in the shelters together. The hearts of the U.S. Sailors have been reaching Japanese people. I really appreciate it and am very proud that JMSDF and the U.S. Navy once again can work together. Thank you all, again,” said Kitagawa.