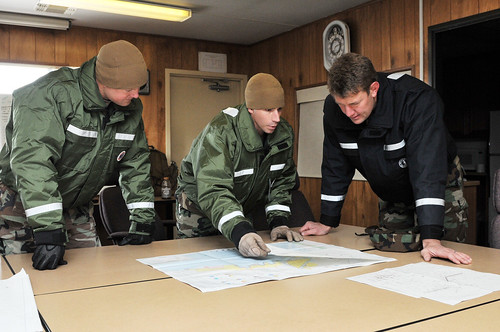 USS BLUE RIDGE, At Sea (March 25, 2011) - Seventh Fleet forces continued support of Japanese Self Defense Force's (JSDF) sustainment of life efforts via Operation Tomodachi. Currently, 19 ships, 140 aircraft and 18,282 personnel of the Fleet are operating in support of the Operation to assist Japan.

Commander Task Force 76 (CTF 76) continued harbor clearance operations in Hachinohe today. USNS Safeguard (ARS 50) with the embarked divers of Mobile Diving and Salvage Unit 1, Explosive Ordnance Disposal Mobile Unit 5 and Underwater Construction Team 2, worked together with Japan Maritime Self Defense Force (JMSDF) and commercial divers to open the harbor for operations. They took underwater surveillance imagery with side scan sonar equipment to detect, mark and move underwater obstacles from the channel and the vicinity of the liquid natural gas (LNG) pier. Late today the local port captain certified the channel and pier for safe navigation. Tomorrow an LNG tanker will enter the port, marking the first delivery since the earthquake and tsunami on March 11. After Hachinohe harbor is clear, Navy teams will continue similar efforts in the ports of Miyako, Kamaishi, Ofunato, and Sendai, debris and other navigational hazards so that ships may resume deliveries of critical supplies.

Commander, Fleet Activities Yokosuka (CFAY) began transferring fresh water to two empty fuel barges, which will be used to support cooling efforts at the Fukushima Daiichi nuclear power plant. A total of 500,000 gallons are being distributed between the barges that have been cleaned of fuel to support fresh water. The first Barge YOGN-115 departed Yokosuka this morning and will be escorted by the Japan Maritime Self Defense Force support ship JS Hiuchi. The second barge is scheduled to leave tomorrow. The water will eventually be used to replace the seawater currently being used in cooling efforts at the plant.

The USS Essex (LHD 2) amphibious ready group, which includes USS Harpers Ferry (LSD 49), USS Germantown (LSD 42) and USS Tortuga (LSD 46), conducted at-sea replenishment today with the USNS Pecos (T-AO 197) to onload additional fuel and humanitarian supplies. A medical team from USS Essex flew to JS Hyuga today to meet up with Japanese medical personnel, then move ashore together to provide assistance. In the coming days, the Essex ARG will assist the JGSDF in moving vehicles and fuel to the island of Oshima, off the coast of Kessenuma.

A P-3 "Orion" from VP-4 and assigned to CTF-72 conducted a reconnaissance flight today to survey ports and roads in Mukai, Toni, Kuji, and Ofunato. The crew spotted the words "HELP WATER" formed in the snow of a baseball field located beside an elementary school. They quickly relayed the information to the Japan Self Defense Force, and ensured that the site was being serviced by the JGSDF.

USS Blue Ridge (LCC-19), flagship for the United States Seventh Fleet, departed White Beach, Okinawa, after onloading supplies and additional personnel to augment the staff during the crisis. Seventh Fleet commander Vice Adm. Scott Van Buskirk returned to the flagship today after a one-day trip to Yokosuka to meet with his JMSDF counterparts.

Since Operation Tomodachi started, U.S. 7th Fleet forces have delivered more than 230 tons of HA/DR supplies to survivors of the tsunami and earthquake, in support of Japan Self Defense Force efforts.