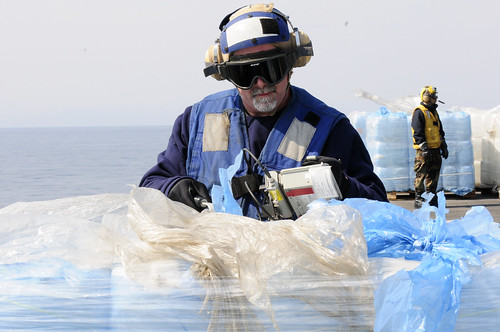 USS BLUE RIDGE, At Sea (March 26, 2011) - Seventh Fleet forces continued support of Japanese Self Defense Force’s (JSDF) sustainment of life efforts via Operation Tomodachi. Currently, 19 ships, 140 aircraft and 18,282 personnel of the Fleet are operating in support of the Operation to assist Japan.

Commander Task Force 76 (CTF 76) continued harbor clearance operations in Hachinohe today. USNS Safeguard (ARS 50) with the embarked divers of Mobile Diving and Salvage Unit 1, Explosive Ordnance Disposal Mobile Unit 5 and Underwater Construction Team 2, worked with Japanese Maritime Self Defense Force (JMSDF) and commercial divers to open additional areas of the harbor for operations. Teams cleared the Liquid Natural Gas (LNG) pier in preparation for the arrival of an LNG tanker which will bring much needed fuel to the crisis stricken area. With many displaced personnel still living in shelters without electricity or heat, requests for fuel have been a consistent theme from survivors to Navy personnel delivering aid packages. Navy teams are working with the Japan Self Defense Force (JSDF) and local authorities to plan for similar efforts in the ports of Miyako, Kamaishi, Ofunato, and Sendai.

Commander, Fleet Activities Yokosuka (CFAY) handed over the second of two water barges today to the Japan Maritime Self Defense Force. Together with the first barge sent yesterday, a total of 500,000 gallons of fresh water is en route the area off the coast of the Fukushima Dai-Ichi nuclear power plant to support cooling efforts for the damaged reactors. The JMSDF ship JS Hiuchi is escorting with the first barge arrival scheduled for tomorrow. The fresh water may be used in replacement of salt water in the cooling operations to lessen the corrosive impact of salt from the sea water which is currently being used for emergency cooling.

The USS Essex ARG will conduct an amphibious resupply of Oshima Island, off the coast of Kessennuma, early tomorrow morning. The ship will launch two Landing Craft Units (LCUs) carrying Japan Ground Self Defense Force personnel and vehicles, as well as a commercial electrical utility truck and a fuel truck to the island that has been largely cut off since the earthquake and tsunami March 11.

The USS Curtis Wilbur (DDG 54) returned to Yokosuka for resupply, making it the first U.S. Navy ship to return to Yokosuka since March 22.

USS Blue Ridge (LCC-19), flagship for the United States Seventh Fleet, remains at sea in the vicinity of Okinawa. The ship is serving as the floating headquarters for 7th Fleet commander Vice Adm. Scott Van Buskirk and his staff of about 300, who are filling the role of Joint Force Maritime Component Commander, or “JFMCC”, under the Joint Support Force is overseeing all U.S. military assistance to Japan.

Since Operation Tomodachi started, U.S. 7th Fleet forces have delivered more than 230 tons of HA/DR supplies to survivors of the tsunami and earthquake, in support of Japan Self Defense Force efforts.