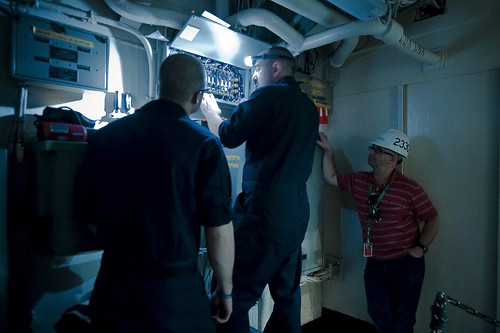 PACIFIC OCEAN (March 25, 2011) - Sailors and civilians are working side-by-side whileaboard the aircraft carrier USS George Washington (CVN 73) continuing the ship’s routine maintenance period, but this time, there is nothing routine about how they are conducting business. The crew and contractors are making repairs while underway as George Washington needed to pull out to sea due to the complex nature of the disaster that struck Japan on March 11. The combined work force has put a special focus on the habitability or creature comforts of the ship which increases the quality of life for the crew.

“We are in a very unique position to have these craftsmen aboard George Washington working with and mentoring our Sailors,” said Capt. David A. Lausman, commanding officer. “The most important part of our ship is the habitability of our Sailors; where they sleep, where they take care of themselves and where they eat. This work is critical towards the success of the ship.”

The more than 450 civilians doing this mission critical work are from the Puget Sound and Norfolk Naval Shipyards. Their work includes restoring George Washington’s capability to do laundry, provide ventilation to areas of the ship, fix piping, assemble gym equipment and reopen Wardrooms and Galleys where the crew eats.

“A lot of jobs just were not completed when the earthquake hit — they were halted in production.” said Ensign Morris Hampton, the electrical safety officer and technical liaison for maintenance at sea. “I don’t think any aircraft carrier has ever done quite what GW [sic] is doing—“We’re really setting milestones here with getting the ship ready at sea.”

Many of the shipyard workers are former Sailors who understand better than most how important habitability projects are for today’s Navy.

“Aboard a floating city, life can sometimes be tough so it’s important to have hot water, cold air, ventilation and most importantly laundry services,” said Jimmy Rabino, a PSNS welder for nearly 40 years. “This deployment marks my fourth aircraft carrier that I’ve been to sea with: My first was aboard USS Hancock (CV-19) in 1962 and my last will be aboard USS George Washington in 2011.”

The long term affect of these projects will benefit Sailors for years to come aboard George Washington. But for the Sailors who are directly working with these skilled, now salty shipmates, the benefit is immediate.

“I’ve learned so much more than I thought I could from the ship riders and team members,” said Machinist’s Mate Fireman Dillon Tyler. “We’re all in the same boat—literally—so having them working with us to complete our goals means we can get the job done faster and safely.”