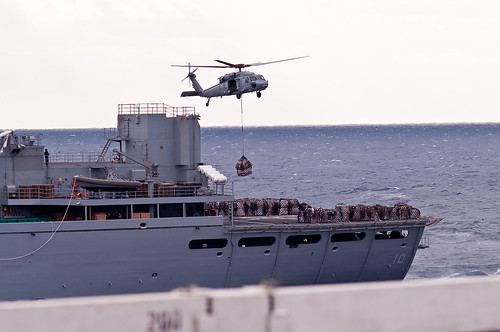 George Washington is currently deployed in the western Pacific Ocean with her full ship’s company and an additional group of more than 450 civilians from the Puget Sound and Norfolk Naval Shipyards.

The 117 pallets, carrying mostly food and some logistical supplies, were transferred via a supply helicopter, MH-60S Knight Hawk from the “Wild Cats” of Helicopter Combat Squadron (HSC) 23, to George Washington’s flight deck where they were then transferred to their respective storage facilities.

“We requested a VERTREP to top off on food and make sure our crew and our civilian ship riders are well fed,” said George Washington’s Assistant Supply Officer Cdr. Tim Griffin. “We need to take advantage of our support systems and all opportunities provided by food suppliers, given the [current] uncertainty of our ship’s schedule.”

This VERTREP marked the first replenishment at sea in 2011 for the forward-deployed aircraft carrier. The nearly four-hour replenishment was accomplished with the help of 150 Logistics Specialists and a 100- man working party.

“This was a great experience. It served as a training opportunity, especially with only one [helicopter] dropping off the payload,” said Logistics Specialist 1st Class (SW) Reggie Guevarra, from the Philippines. “Even though many of us are veterans—we’ve performed hundreds of replenishments—it still serves as a refresher for us and an excellent, controlled evolution for our Sailors fresh out of their initial training.”

After the supply helicopter completed the VERTREP, teams of Aviation Ordnanceman transferred the thousands of pounds of food and supplies to one of the ship’s massive flight deck elevators using forklifts. There, teams of Logistics Specialists were waiting to sort and direct for further transit into the ship.

“I had a fun time today on the flight deck,” said Logistics Specialist 3rd Class (AW) Bruce Holmes from Oakland, Calif. “I moved more cargo than I ever thought I could and because of our team’s work ethic, it was actually not too challenging—it was hard, but organized.” George Washington is the Navy’s first and only permanently forward-deployed nuclear powered aircraft carrier, ensuring security and stability across the western Pacific Ocean.