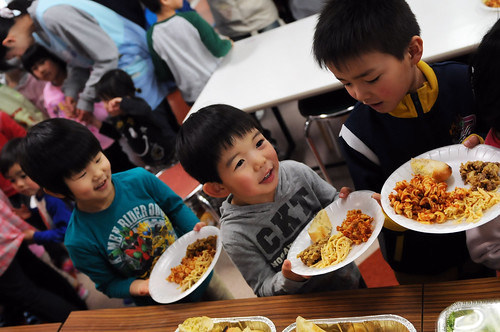 SHICHINOHE, Japan (March 26, 2011) Children laugh as they wait in line for a home cooked meal at the Biko-en Childrens Care House during a community service project hosted by Naval Air Facility Misawa (NAFM). Along with the meal volunteers from NAFM and Misawa Air base donated food, clothing and toys to the center. (U.S. Navy photo by Mass Communication Specialist 2nd Class Devon Dow/Released)

SHICHINOHE, Japan - More than 25 Sailors, Airmen and, family members from Naval Air Facility Misawa (NAFM) and Misawa Air Base (MAB) visited the Biko-en Children’s Care House, here, During their visit, volunteers delivered food, clothing, and toys as well as preparing a home cooked meal for the children and staff members of the center.

The home’s director, Tatsuya Goto, said he could not believe the generosity of the volunteers and was happy about the partnership with NAFM.

“We are very thankful and appreciative for the assistance from NAFM,” he said. “Their support means a lot. When they come to the center the children are always so happy to see them.” With more donations to come from the U.S., an effort that is being coordinated by civilian volunteers from the NAFM and MAB community, Goto said he plans to distribute many of the incoming donations to other nearby centers.

“American’s have very big hearts,” he said. “The donations will be able to support many children centers who need them, not just here, but in areas further south of here that were damaged by the earthquake.”

For 20 years, volunteers from NAFM have been offering their time and resources at the facility, which cares for more than 60 children. Their efforts have created a lasting bond of friendship.

Volunteers learned about the center’s limited supplies and through social media networking were able to gather, in three days, 132 bags of groceries and seven pallets of fresh vegetables for the home.

NAFM coordinates it support to the center through its 1st Class Petty Officer Association. Past projects and activities have ranged from landscaping, to hosting holiday festivities for the children, playing games, and spending time with the children.

Personnel Specialist 1st Class Gio Espinosa, from Rancho Cucamonga, Calif., assigned to Personnel Support Detachment Misawa, who has been volunteering at the center since he arrived in Misawa, said the time spent at the center is rewarding.

“As long as I have been coming here we never have a problem filling sign-up sheets, everyone stationed here is very fond of this center and are glad to show support,” he said. “The amount of donations that have made their way here is incredible. It is great to see NAFM and MAB pull together to raise the donations to support the children here.”

NAFM opens volunteer opportunities to the center for all members of the base community.

For Master Sgt. Naomie Gall, assigned to MAB, it was her first time visiting the center. She brought along her two sons to teach them the value of giving and to give them a chance to interact with the children. Gall said it was a day she and her sons would never forget.

“I am very happy that my children and I were apart of this today, it was great to see all of the children smiling,” said the Haines City Fla. native. “It is good to see volunteers from base out in full force helping our Japanese friends. This truly is a gesture of friendship and a chance to show the local community how much we care about them.”

Since the recent earthquake and tsunami that damaged cities along Japan’s eastern coast, NAFM and MAB have been participating in humanitarian and recovery efforts in the local community. Sailors and Airmen have supported cleanup projects at Misawa fishing port and city administration offices in Hachinohe, Japan, as well as establishing numerous donation drives.