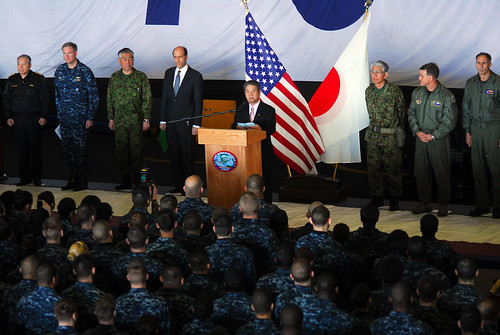 The work of U.S. service members and other Americans is a testament to the half century of tomodachi -- friendship -- between the United States and Japan, Kitazawa said as he shared a statement from Japanese Prime Minister Naoto Kan.

"To all U.S. military members, on behalf of the people of Japan, I sincerely express my deep appreciation for the tremendous support provided by the U.S. military, the U.S. government and the American people at a time of unprecedented crisis in Japan," Kitazawa said.

USS Ronald Reagan responded immediately after the disaster, and its Sailors, as well as other service members, continue the humanitarian mission in Japan "with pride and passion" and "are supporting Japan on an extraordinary scale," he said.

As of March 25, more than 1,000 Sailors and Marines were deployed in support of Operation Tomodachi and had flown more than 450 missions for recovery, transport and supplies distribution, according to the U.S. embassy officials in Tokyo.

"The entire Japanese people are deeply moved and encouraged by scenes of U.S. military members working hard in support of relief efforts," he said. "Those in Japan and the United States are true tomodachi. ... They share basic values such as democracy and respect for human rights."

Faced with such a disaster, Kitazawa said, "in no time like the present do I feel so strongly about our friendship with the United States. Your support is a testament of our enduring bond for more than half a century. Japan, with your continuous cooperation, is determined to launch a full-scale effort to overcome these challenges ahead of us."

"Looking out over this spectacular view, in front of all you great Americans, I am awed to be here, and I can't tell you how deeply moved I am by all you've accomplished in the last several weeks," he said.

Roos offered U.S. condolences to the Japanese, noting that he saw the disaster's effects firsthand in northeastern Japan.

"One cannot even begin to imagine the devastation until you witness it yourself, and even then it's hard to imagine," Roos said. "I met with people who lost almost everything in their lives, including their loved ones," he continued. "I could not help but be moved by their calm dignity and resilient spirit."