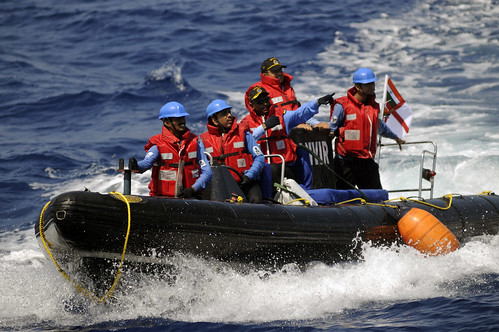 “We’re excited about having the opportunity to operate with the Indian navy. Anytime we have support from the Indian Navy it acts as a force multiplier,” said Miller. “We share many common objectives in the region.”

“I’ve seen two Malabar exercises as a pilot and there’s always a lot for the Indian navy to learn and the American navy as well,” said Srinivasan. “The exercise is very important. You don’t really know how well two navies will perform together until you operate together.”

The Indian Navy Rajput-class guided-missile destroyer INS Ranvijay (D 55) Commanding Officer Capt. Dil Bag-Singh, said he looks forward to exercises like this, because it strengthens the bond and personal relationship between the two navies.

“It’s a pleasure to be in an exercise with the U.S. Navy. It’s the largest most powerful Navy in the world,” said Bag-Singh. “This exercise helps us strengthen our interoperability and work on strategy. We have common goals and interests in this region and I’m sure this exercise will be a success.”