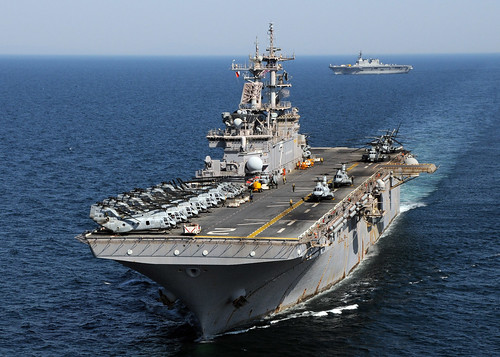 One of the largest humanitarian operations in history, Operation Tomodachi was initiated after a 9.0 earthquake and subsequent tsunami struck northeastern Japan March 11.

Within hours of the tragedy, Sailors assigned to the amphibious assault ship USS Essex (LHD 2) were recalled from liberty in Kota Kinabalu, Malaysia. Within less than 24 hours, Essex got underway and made full speed for Japan, where it joined USS Germantown (LSD 42) and USS Harpers Ferry (LSD 49), which had been operating off the coast of Indonesia.

Due to initial concerns of radiological and navigational hazards on the eastern coast of Honshu, Essex, Germantown and Harpers Ferry were directed to take position on the west coast of Honshu. They arrived off the coast of Sakata, Japan March 17 and immediately began flying coastal surveillance flights.

“I think I can speak for the entire Essex crew when I say that we felt a strong obligation to our host nation to support them in any way we could during this tragedy,” said Capt. David Fluker, Essex commanding officer. “We train regularly with our Japanese counterparts in the Japan Maritime Self-Defense Force so that we’re ready to respond to a situation like this. What we’ve been able to accomplish together over the past few weeks is not only a result of the close relationship we share, but has also strengthened that relationship even further. Our best wishes go out to them as they press on with their recovery efforts.”

USS Tortuga (LSD 46) had been in port in Sasebo, Japan and immediately embarked landing craft and got underway for northeastern Japan March 11. The ship was directed to proceed to Tomakomai, Hokkaido in northwestern Japan, where the crew embarked 273 Japan Ground Self Defense Force troops, 93 vehicles and equipment for delivery to Onimato.

Essex, Germantown and Harpers Ferry were directed to reposition their ships to the northeast coast of Honshu March 20. They departed the coast of Akita and arrived off the coast of Hachinohe March 22 and immediately began flying humanitarian assistance and disaster relief supplies ashore. These items included water, blankets and health and comfort kits. Helicopters with Marine Medium Helicopter Squadron 262 also flew aerial surveys of 200 mile of affected coastline between Miyako and Ofunato.

With more than 150 amphibious vehicles and 20 aircraft, the 31st MEU was able to distribute HADR supplies by air and by sea. PHIBRON 11 was capable of providing meals ready-to-eat, fresh water and bilingual personnel to assist in communication between U.S. service members and Japanese citizens. ACU-1 and BMU-1 supported the operation with amphibious landing craft, which they used to transport vehicles, cargo, supplies and personnel to affected areas.

During an operation to assist the residents of the island of Oshima, whose utility services and ferry transportation were completely destroyed by the earthquake and tsunami, Sailors with the Essex ARG and Marines with the 31st MEU transported commercial electric utility vehicles, a fuel truck, a water re-supply vehicle and a civilian work crew from the Tohoku Power Company from mainland Japan via landing craft to the island. As a result, power was partially restored to the island March 27.

Sailors and Marines also provided items to displaced residents of Oshima during a donation drive sponsored by the ship’s Junior Sailor Association (JSA). Two pallets of clothes, blankets, food and toys were packaged and flown to the JMSDF helicopter destroyer JS Hyuga (DDH 181), where they were distributed to displaced residents who were temporarily embarked aboard the ship.

Logistics Specialist 2nd Class (SW/AW) Alejandra Gutierrezalba, Essex JSA vice president, said she felt it was the duty of Essex Sailors and Marines to provide aid during one of the largest natural disasters in Japan’s history.

“We live in their country, so I feel like it’s our obligation to help them in their time in need,” she said.

Gutierrezalba’s thoughts were shared by Operations Specialist 2nd Class (SW/AW) Kelvin Estell, who said it is the Navy’s obligation to help the host country when called upon.

“We have to be concerned about their welfare,” he said. “It’s up to us to help them get back to speed and get them on the right track to recovery.”

The operation also focused on helping the people of Oshima. Working in conjunction with the JSDF, the ARG and 31st MEU delivered 15,000 pounds of relief supplies, including food, water, and health and comfort packages. Sailors and Marines also cleared debris from three harbors, roads and a beach. Additionally, Marines set up a temporary shower facility at a local school, allowing some of the residents of Oshima to bathe for the first time since the tsunami struck.

In all, the Essex ARG launched 218 aircraft and landing craft in support of reconnaissance and relief distribution missions, and more than 166,000 pounds of supplies were delivered ashore.

Upon completion of the operation, a ceremony held on Oshima April 6, officially bringing the ARG’s participation to a close. Rear Adm. Jeffery S. Jones said it was an honor to provide assistance to the citizens of Japan during their time of need.

After the ceremony, Jones expressed his appreciation to the Sailors and Marines aboard Essex for their efforts throughout the operation.

“I’d like to thank all the Sailors and Marines of Essex,” he said during an announcement on the ship’s announcement system. “Your devotion to duty makes me humble to serve with you.”

JMSDF Lt. Hiroaki Tanaka, who served as a liaison officer between the Essex ARG and JMSDF forces in the area, expressed appreciation on behalf of the people of Japan.

“Thank you,” he said. “We are extremely thankful for your help and cooperation. I will never forget everything you have done for us.”

Even as the Essex ARG and 31st MEU ends its participation in Operation Tomodachi, and Japan slowly rebuilds, PHIBRON 11 Commodore Capt. Bradley Lee said the Navy would continue to be there for their host nation to the end.

“The Sailors and Marines of the Essex ARG were very anxious to help in any way we could and just hope that our efforts were able to make a genuine difference in the lives of those affected by the earthquake and resulting tsunami,” he said. “The strength and resolve that we saw on a daily basis by the Japanese people made all of us stop and be very thankful that we have such resilient allies and made us proud to serve alongside them, both now and in the future. We stand committed to helping the Japanese restore normalcy to the lives of those affected by these terrible tragedies.”