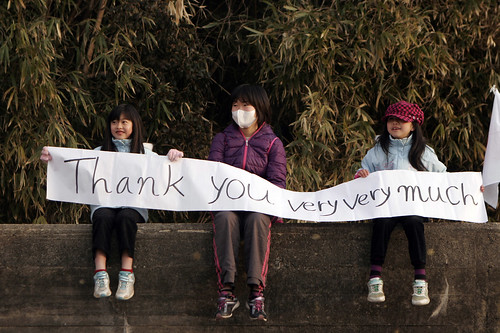 OSHIMA ISLAND, Japan (April 7, 2011) Children hold a banner with their mother, thanking Marines and Sailors of the 31st Marine Expeditionary Unit for their work. The Marines and Sailors spent about six days cleaning up debris on parts of the island, during Operation Field Day. (Marine Corps photo by Lance Cpl. Garry J. Welch)

USS BLUE RIDGE, At Sea (April 8, 2011) - Residents of Oshima Island waved goodbye yesterday to the Marines of the 31st MEU and Sailors from USS Essex (LHD 2) after a 7-day effort of clearing debris from the shores of the Uranohama, Yogai and Komagata harbors, restoring access roads and cleaning out several schools on the island.

The Sailors and Marines conducted Operation Field Day, a name derived from a shipboard cleaning event, which was focused specifically on Oshima Island and assisting those residents there as the island had been largely cut off since the tsunami. Additionally, Marines set up a temporary shower facility at a local elementary school, allowing some of the residents of Oshima to bathe for the first time since the tsunami struck. After finalizing the cleaning and clearance operations, April 6 officially brought Operation Field Day to a close and also marked the end of USS Essex participation in Operation Tomodachi. Rear Adm. Jeffery S. Jones, Commander Task Force 76, said it was an honor to provide assistance to the citizens of Japan during their time of need.

Just across the inlet, the crew of USS Tortuga (LSD 46), USS Safeguard (T-ARS 50), and EOD Mobile Unit Five presented underwater survey data that they collected over the two previous days in Kessenuma and Oshima to local officials, showing the precise spots where submerged navigational obstructions were located. U.S. Navy officials offered to continue with clearance efforts, but officials from Oshima and Kessanuma indicated that they would prefer for local salvage experts continue salvage operations and large debris removal. Using local salvage professionals further demonstrates the progression of recovery efforts, and aids in economic recovery as well.

Captain Bradley Lee, Commodore of Amphibious Squadron Eleven summed up well “The strength and resolve that we saw on a daily basis by the Japanese people made all of us stop and be very thankful that we have such resilient allies and made us proud to serve alongside them, both now and in the future. We stand committed to helping the Japanese restore normalcy to the lives of those affected by these terrible tragedies,” and despite a lower profile in recovery efforts, US Forces remain ready to help our allies in any additional efforts that may be required.

All U.S. Navy ships involved in Operation Tomodachi have now redeployed and are proceeding with other tasking around the region. Other U.S. military efforts are continuing ashore.