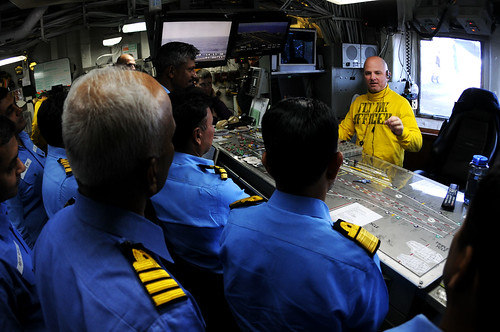 PHILIPINNE SEA - With their final exercise events April 9, the U.S. and Indian navies drew Malabar to a close.

Cmdr. David Miller, commanding officer of the guided-missile frigate USS Reuben James (FFG 57)said it is important to have exercises like Malabar.

“In today’s global environment all actions are in conjunction with a multilateral partner,” said Miller. As the U.S. and India are two of the largest democracies in the world, it’s important to conduct exercises like Malabar so we’re able to work effectively.”

Miller also commented on how Malabar strengthens ties between people of each Navy. “Any time we’re able to work with the Indian Navy our ties are strengthened. A major component of the exercise is trading liaison officers and having officers from their Navy, Marine, and Special Operations board our ships as well as having our officers board theirs,” said Miller.

Miller pointed out how Malabar helps both navies accomplish common objectives in the region.

“One of our big objectives is theater security operations. That involves strengthening ties, freedom of seas, combating piracy, and helping secure worldwide trade. The Indian Navy provides a big piece of that and this exercise prepares us for any future requirements,” said Miller.

Miller added that the cross-training between the two navies made the exercise a success. “My crew learned a lot. We had very successful training with special warfare teams, and operations with other ships. Being able to meet CO’s from Indian vessels was a great opportunity to share experiences,” said Miller.

Due to USS Ronald Reagan's (CVN 76) completion of support in Operation Tomodachi, the Ronald Reagan Carrier Strike Group’s location afforded the opportunity for the strike group to have limited participation in exercise Malabar.