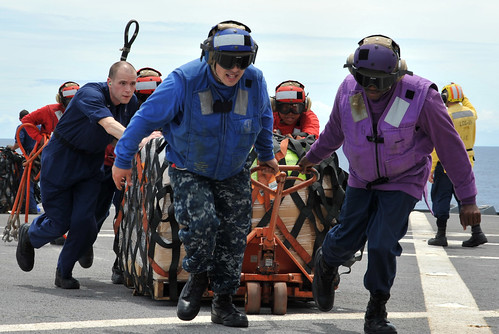 "It was a challenging, yet rewarding underway period," said Blue Ridge Commanding Officer Capt. Rudy Lupton. "We were heartbroken by the devastation and loss of life caused by the earthquake and tsunami that struck Northeast Japan. But, [we were] honored to participate in Operation Tomodachi and provide assistance to the Japanese people."

The tragic events that occurred in Northeast Japan provided an opportunity to demonstrate the significant capability that flexible, rapidly deployable naval forces provide in this vital region. He said he could not be more proud of how the crew adapted to changing events and how well they performed their jobs, Lupton said.

Blue Ridge was moored at Changi Naval Base in Singapore when the magnitude 9.0 earthquake occurred in Northeastern Japan. The earthquake was followed by a tsunami that washed over the coast. Within four hours of the earthquake all Blue Ridge and embarked 7th Fleet staff Sailors and civilians were accounted for and aboard ship.

During the evening of the natural disasters in Japan, Blue Ridge and 7th Fleet Sailors and Marines loaded pallets of HADR supplies onto the flight deck of the command ship. The 50-person working party, made larger by volunteers, loaded more than 90 pallets throughout the night. The supplies from Commander, Logistics Group, Western Pacific, included water, food, canteens and bedding.

"I'm amazed at the things we've achieved in such a short time," said Master Chief Information Systems Technician Lonnie Gillilan. "We've all been pulling together, with no complaining. I'm very impressed."

Blue Ridge departed Changi Naval Base less than eight hours after loading the supplies, steaming toward Japan in support of the operation. The ship brought command-and-control to the operation, directed the mobilized force of ships, helicopters and ground forces while aiding the citizens of Japan.

"Our mission is to provide persistent command and control support to the Commander, 7th Fleet as well as assist with developing and strengthening relationships with our partners in the region," said Lupton. "During the past two months, the crew excelled at accomplishing both missions."