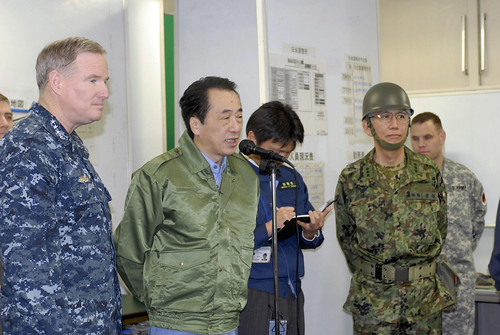 CAMP SENDAI, Japan (April 10, 2011) Japan Prime Minister Naoto Kan speaks to U.S. service members and media during a visit to expresse his appreciation to the U.S. military, Japan Ground Self-Defense Force and Joint Task Force Tohoku for such quick response to the natural disaster. The Prime Minister said that the bonds between the U.S. and Japan have been strengthened by this unified effort for relief during Operation Tomodachi. (U.S. Army photo by Photo by Spc. April de Armas)

Kan took time to visit the U.S. forces, the Japan Ground Self-defense Force and Joint Task Force Tohoku to thank them for their hard work and dedication in support of Operation Tomadochi.

“I am the Japanese Prime Minister, Naoto Kan, and on behalf of all the Japanese people I'd like to say thank you very much for the tremendous work after the great earthquake occurred,” said Kan.

“U.S. Forces dispatched the USS Ronald Reagan and other major units from the Army, The Marines, the Air Force, and the Coast Guard. And you have also dispatched units to respond to the nuclear disaster in Fukushima,” said Kan. “I am sure that Operation Tomodachi is an Operation that will strengthen our relation between Japan and the United States. And that this is also a feeling that will be shared by myself and all the other Japanese people.”

Walsh was humbled by his kind words and expressed his own feelings of friendship toward the Prime Minster and the Japanese people.

“Your heartfelt words remind us that while nations have interests, people have friends,” said Walsh. “It has been an honor and I am pleased to be your friend during this operation and these difficult days.”

Kan was pleased with the joint effort of the U.S. military, JGSDF and JTFTH. He was thankful for the strong leadership of all involved.

“I'd like to say thank you for the work you have done jointly, the Japanese Staff under the leadership of General Kimizuka as well as the U.S. Armed Forces Staff under your commander,” said Kan.