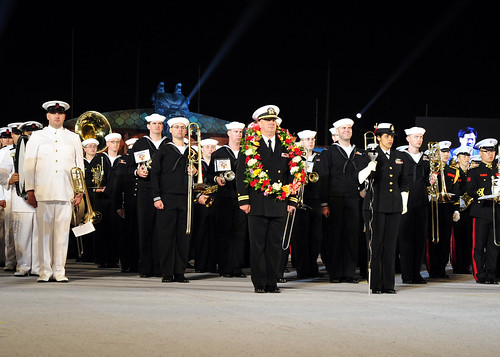 The event, which is hosted by the Republic of Korea every two years, invites military bands from around the world to play during the music festival and foster multicultural relations between participating countries, which include bands and honor guards from the Netherlands, Thailand, New Zealand, the Republic of Korea and the U.S.

He said that despite the logistical difficulties with traveling stemming from challenges that the Japan earthquake had caused, including a temporary relocation to Commander Fleet Activities Sasebo, the band is playing well and enjoying their performances for the people of the Republic of Korea.

Aside from the main event at Jinhae Public Stadium, the U.S. 7th Fleet Band also played at a variety of smaller venues, allowing the band to perform more personal shows for local residents.

The band puts on a special show called Super Ceremonial Band, which calls for direct interaction with the audience.

“We play brass band, New Orleans style Dixieland music,” said Musician 2nd (SW) Class James Caliva. “It allows us to be mobile, engage the audience, as we call it ‘fast attack.’ We can go in, play a gig and then pack up. We can hit three gigs in one day instead of playing a big show for just one audience. We can do it up to three times around the entire city.”

The U.S. 7th Fleet Band kept a busy schedule during a four day tour around Changwon city. The band participated in marches and played for public venues during the day while still conducting rehearsals and performing evening shows at the festival.

Even with the challenges brought on by the Japan earthquake and the busy schedule, the band members still found time to enjoy what they do, says Caliva.

“We love the interaction, with the kids, the groups,” he added. “It’s fun.”